United Nations human rights investigators have said they had "reasonable grounds" to believe that limited amounts of chemical weapons had been used in Syria.

In their latest report, they said they had received allegations that Syrian government forces and rebels had used the banned weapons, but that most testimony related to their use by state forces.

The commission examined four reported toxic attacks in March and April, but could not determine which side was behind them.

President Bashar al-Assad's government and its opponents have accused each other of using chemical weapons.

A team from the UN conducted 430 interviews from 15 January to 15 May among refugees in neighbouring countries and by Skype in Syria.

Vitit Muntarbhorn, one of its members, said the team had cross-checked testimony about chemical weapons and viewed videos, including on YouTube.

But findings remained inconclusive and it was vital that a stalled separate team of experts named by UN Secretary-General Ban Ki-moon be given full access to Syria to collect samples from victims and sites of alleged attacks, the team said.

In any case, atrocities committed with conventional weapons far outweighed any casualties from the use of chemical agents, Mr Pinheiro said, noting the absence of a large-scale toxic attack.

"The conflict in Syria has reached new levels of brutality", they said in their 29-page report.

Syrian leaders must be held accountable for directing a policy that includes besieging and bombing cities and executing civilians, the investigators said.

"The documented violations are consistent and widespread, evidence of a concerted policy implemented by the leaders of Syria's military and government," they said.

It is their fifth report on the 26-month-old war that has killed more than 80,000 people.

UN Secretary-General Ban Ki-moon has expressed his anger over the atrocities detailed in the report.

"Frankly, he finds the catalogue of atrocities in that report to be both sickening and staggering."

France has said it was certain that the nerve agent sarin had been used in Syria on several occasions following tests it carried out on samples recovered from the country.

"These tests show the presence of sarin in various samples in our possession," Foreign Minister Laurent Fabius said in a statement, adding that the test results had been handed to the UN.

"France is certain that sarin gas was used several times in Syria in limited areas."

However, the US wants to gather and review more evidence about the use of chemical weapons in Syria before making decisions about how to respond, said White House spokesman Jay Carney.

Mr Carney said the US believes most chemical weapons in Syria remain under the government's control and was "highly sceptical" of claims that the opposition had used them in warfare.

"We need more information," he said.

Meanwhile, Russian President Vladimir Putin said any attempt at foreign military intervention in Syria was doomed to fail and would make the situation worse.

Speaking at a joint news conference after a summit with European Union leaders, Mr Putin said Russia was disappointed by an EU decision not to extend an embargo on member states arming rebel forces fighting the Syrian government.

For the past two weeks, Syrian government forces have laid siege to the border town of Qusair, where agencies say hundreds of wounded and other civilians are trapped in dire conditions.

Syrian rebels and allied foreign militants have murdered civilians as well as captured soldiers, often after "show trials" in an increasingly sectarian conflict, the UN said.

"They continue to endanger the civilian population by positioning military objectives in civilian areas," it added.

However, war crimes by rebels, including murder, torture and hostage-taking, did not reach the intensity and scale of those committed by government forces and affiliated militia.

The team called on the UN Security Council to ensure that those responsible for crimes face justice, including by possible referral of Syria to the International Criminal Court.

"Accountability will come, it will come in any case," said Carla del Ponte, a former UN war crimes prosecutor and a member of the commission.

At least 17 massacres were committed in the period under review, making a total of 30 since September, the UN said.

Dozens of women and children were killed in May in the coastal villages of Baida and Banias, where evidence links the slaughter to government-backed militia, it said.

11 kneeling, blindfolded men were shot in the back of the head in Deir al-Zor province by al-Qaeda-linked Nusra Front rebels, the UN said, citing a video that appeared in May.

Regarding a separate incident near Deir al-Zor in which the evidence also points to rebels, it said: "Video footage emerged showing a child participating in the beheading of two kidnapped men.

"Following investigation, it is believed that the video is authentic and the men were soldiers, killed as depicted." 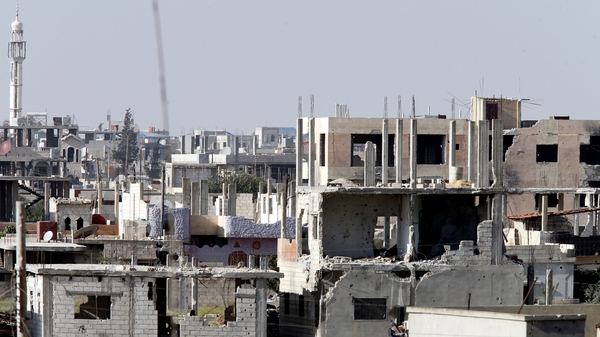 12 Syrian rebels killed in clashes with Hezbollah in Lebanon