France has said the international community would need to respond with force if allegations that Syrian government forces had carried out a mass chemical attack on civilians proved to be true.

Opposition activists said it is estimated that between 500 and 1,300 men, women and children were killed in yesterday's attack.

It would be the world's most lethal chemical weapons attack since the 1980s if confirmed.

UN Secretary-General Ban Ki-moon has said the alleged attack should be investigated by UN inspectors "without delay".

A team of UN chemical weapons inspectors, led by Ake Sellstrom, arrived in Syria at the weekend.

The UN said it is asking the Syrian government to permit its experts to investigate the alleged gas attack and grant them access to the site.

Mr Ban's press office said: "The Secretary-General believes that the incidents reported yesterday need to be investigated without delay.

"A formal request is being sent by the United Nations to the Government of Syria in this regard. He expects to receive a positive response without delay."

The US and others said they had no independent confirmation that chemical weapons had been used, but there has been worldwide condemnation of yesterday's events.

French Foreign Minister Laurent Fabius said that if the UN Security Council could not make a decision, one would have to be taken "in other ways", without elaborating.

Germany has also demanded that the UN weapons inspectors should be given full access in Syria.

"All red lines have been crossed but still the UN Security Council has not even been able to take a decision. This is a responsibility for the sides who still set these red lines and for all of us," Mr Davutoglu said in Berlin.

The US State Department has said that US President Barack Obama has directed the US intelligence community to urgently gather information to help verify allegations.

The UN Security Council last night called for "clarity" on the situation, but did not explicitly demand a UN investigation.

The US and European allies believe President Bashar al-Assad's forces have used small amounts of sarin before, hence the current UN visit.

Mr Obama has made the use of chemical weapons by Assad's forces a "red line" that in June triggered more US aid to the rebels.

Immediate international action is likely to be limited, with the divisions among major powers that have crippled efforts to quell over two years of civil war still much in evidence.

Russia backed up Syrian government denials by saying it looked like a rebel "provocation" to discredit Mr Assad.

Urging an "objective" inquiry, Russia said the very presence of that team suggested government forces were not to blame.

Reports of more attacks around Damascus

Mr Assad's forces have kept up their pressure on rebel-held suburbs of Damascus, with activists saying government forces bombarded the region again today.

The opposition said President Assad's forces fired rockets that released deadly fumes over rebel-held eastern Damascus suburbs, which are part of what is known as the Ghouta.

The area is an expanse of old farmland dotted with large built up areas inhabited mostly by members of Syria's Sunni Muslim majority that have been at the forefront of the uprising against Mr Assad's Alawite rule.

In Ghouta this morning, rockets fired from multiple launchers and heavy mortar rounds hit the neighbourhoods of Jobar and Zamalka, which are on the eastern outskirts of the capital, the activists said.

Rockets also hit the nearby district of Qaboun to the north, and the Yarmouk Palestinian refugee camp area to the south.

Images of yesterday's attack, including some by freelance photographers supplied to Reuters, showed scores of bodies laid on the floor of a clinic with no visible signs of injury.

Some showed people with foam around their mouths. 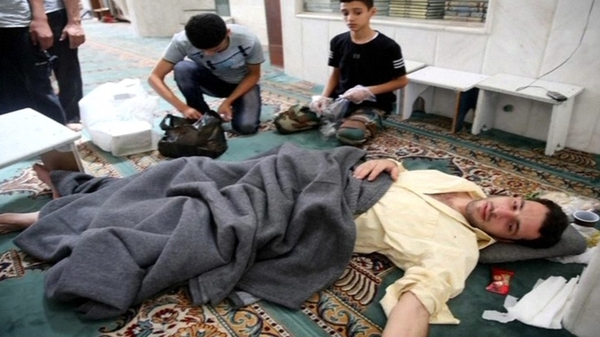