If confirmed, it would be by far the worst reported use of chemical weapons in the two-year civil war.

An opposition monitoring group, citing figures compiled from medical clinics in the Damascus suburbs, put the death toll at 494.

It said 90% of the people had been killed by gas, the rest by bombing and conventional arms.

The rebel Syrian National Coalition said 650 people had been killed.

Images, including some taken by freelance photographers and supplied to Reuters, showed scores of bodies laid out on the floor of a clinic with no visible signs of injuries.

Reuters was not independently able to verify the cause of their death.

Syrian state television said the accusations were fabricated to distract a team of UN chemical weapons experts, which arrived three days ago.

Western countries called urgently for the inspectors to be dispatched to the scene to investigate the incident.

The Damascus Media Office monitoring centre said 150 bodies were counted in Hammouriya, 100 in Kfar Batna, 67 in Saqba, 61 in Douma, 76 in Mouadamiya and 40 in Irbib, all suburbs of Damascus.

A nurse at Douma Emergency Collection facility, Bayan Baker, said that many of the casualties were women and children.

"They arrived with their pupils dilated, cold limbs and foam in their mouths. The doctors say these are typical symptoms of nerve gas victims," the nurse said.

The UN Security Council said it was necessary to clarify the details of the alleged attack, but it stopped short of demanding an investigation by the UN inspectors currently in the country.

"There is a strong concern among council members about the allegations and a general sense that there must be clarity on what happened and the situation must be followed closely," Argentina's UN ambassador, Maria Cristina Perceval, told reporters after the meeting.

The US, Britain and France are among around 35 countries that called for chief UN investigator Ake Sellstrom to investigate the incident as soon as possible.

UN diplomats, however, said Russia and China opposed language that would have demanded a UN inquiry.

The UN inspection team is in Syria investigating allegations that both rebels and army forces used chemical weapons in the past, one of the main disputes in international diplomacy over Syria.

The UN earlier said Mr Sellstrom is in discussions with the Syrian government over the alleged attack.

UN Secretary-General Ban Ki-moon was shocked by the report of the alleged attack, his press office said in a statement.

The White House said the US condemned any and all use of chemical weapons and urged the Syrian government and opposition to provide immediate access to any sites of importance for the UN inspectors.

France and Britain have said that UN inspectors should be allowed immediate access to the site of today's deaths.

British Foreign Secretary William Hague said: "There is no reason not to be given access when (the site) is not so many miles from where they are doing their work now.

"I hope this will wake up some who have supported the Assad regime to realise its murderous and barbaric nature."

Turkish Foreign Minister Ahmet Davutoglu has said it is clear from television images coming from Syria that chemical weapons had been used.

The European Union has called for a thorough and immediate investigation of the alleged chemical attack.

"We have seen with grave concern the reports of the possible use of chemical weapons by the Syrian regime. Such accusations should be immediately and thoroughly investigated," a spokesman for EU foreign policy chief Catherine Ashton said.

"The EU reiterates that any use of chemical weapons, by any side in Syria, would be totally unacceptable."

A Syrian military officer appeared on state television and said the allegations were untrue, and a sign of "hysteria and floundering" by Mr Assad's opponents.

The head of the opposition Syrian National Coalition said Mr Assad's forces had carried out a massacre.

"This is a chance for the (UN inspectors) to see with their own eyes this massacre and know that this regime is a criminal one," Ahmed Jarba said.

If confirmed, it would also be the worst known use of chemical weapons since Iraqi leader Saddam Hussein gassed thousands of Kurds in the town of Halabja in 1988. 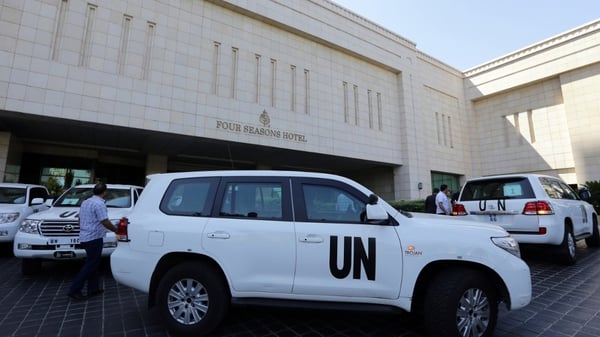