Syrian refugees continue to flee to northern Iraq, where the Kurdistan regional government has placed a limit of 3,000 on the number of refugees they will allow cross the border each day.

About 30,000 refugees, believed to be mainly Syrian Kurds, have entered Iraq since Thursday, and up to 3,000 lined up to cross today, the UN refugee agency UNHCR said.

Jumbe Omari Jumbe of the International Organisation for Migration (IOM) said a similar quota of 3,000 was set yesterday, but that 5,000 refugees were allowed to cross by the end of the day.

Asked about the reasons for the exodus, Mr Jumbe said: "There is a perception that violence will increase against (Syrian) Kurds by various armed groups including al-Nusra."

Al-Nusra is an Islamist militia linked to al-Qaeda.

The IOM is providing food and water upon arrival, and transport for refugees to three transit facilities.

It plans to deploy an ambulance to ferry the sick from the border to camps.

The bridge has now been reserved for commercial traffic and refugees have been directed to use the Sahela crossing to the south, it added.

"This new exodus from Syria is among the largest we have seen in the conflict," UNHCR spokesman Dan McNorton told reporters.

"Those people crossing this morning ... are drained, they are hot and thirsty, they are walking on a long dirt road as we speak in a long line," Mr McNorton said.

More than 1.9 million Syrians have fled to neighbouring countries and North Africa since the uprising began in March 2011 and Syria descended into civil war.

Nearly half the estimated 4,800 people who crossed yesterday are children, the UN Children's Fund (UNICEF) said.

The World Food Programme will begin distributing food to refugee families from its stocks in Erbil and Al Qaim in Iraq and will send rations to feed 185,000 people for one month from the port of Mersin in Turkey, spokeswoman Elisabeth Byrs said. 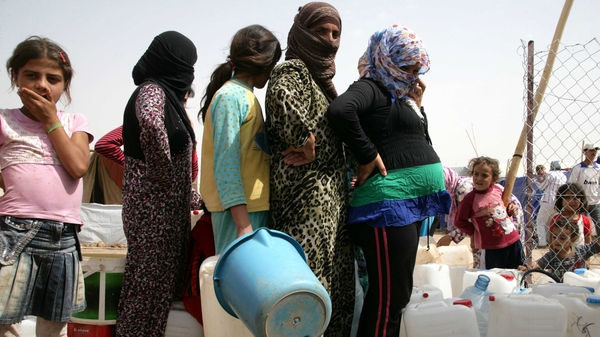