Thousands of Syrian refugees have poured across the border into northern Iraq, taking advantage of a new bridge along the largely closed border.

UN sources claim that between 5,000 and 7,000 refugees followed a first group of around 750 people who crossed the pontoon bridge into the Kurdistan region.

Buses were also seen dropping off families on the Syrian side, according to UN sources.

"Thousands of Syrians crossed into northern Iraq in a sudden, massive movement," Adrian Edwards, spokesman of the UN High Commissioner for Refugees (UNHCR), told a news briefing in Geneva.

Most were families with women, children and the elderly, mainly from Aleppo, Hassakeh and other embattled areas of Syria where fighting has intensified in the civil war, now in its third year, that has driven nearly 2 million refugees abroad.

There are already more than 150,000 Syrian refugees registered in Iraq, according to the UNHCR.

The border between Syria and Iraq has been largely closed since authorities of the Kurdish regional government shut the crossing on 19 May, apart from a single formal crossing point at Al-Wahid in Anbar province.

Some Syrian refugees had been allowed in since mid-July for reasons of family reunification or dire humanitarian need, Mr Edwards added.

Asked about growing insecurity in Iraq after a surge in sectarian violence, he said: "Kurdistan remains relatively safe and stable, however tensions are increasing in view of the forthcoming elections and also to do with other domestic factors there.

"This does have impact on our (aid) delivery programme in Iraq, but nonetheless it is the region where most refugees have come into."

Overall the flow of Syrian refugees has dropped sharply since a peak earlier this year when 5,000 to 8,000 crossed every day into neighbouring countries, according to the UNHCR.

The agency is also monitoring the turmoil in Egypt, where there are 107,000 Syrian registered refugees, although the government estimates that the true number is closer to a quarter of a million, Mr Edwards said. 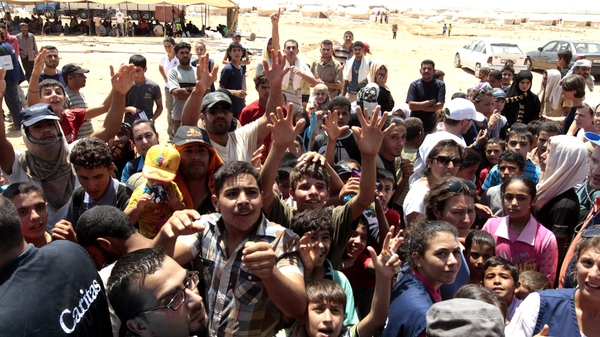 Syrians fleeing war at rate not seen since Rwanda