Monsoon rains reinforced by a tropical storm flooded half the Philippine capital in just 24 hours, triggering landslides and killing at least seven people.

At least 40,000 people sought shelter in government evacuation centres across the main island of Luzon.

More than double that number moved to relatives' or friends' homes for safety, as schools and government offices shut for a second day.

Financial markets suspended trading and most banks and private firms were closed as a month's normal rainfall fell in one day.

The weather bureau kept a "red" rainfall warning over Manila, its highest alert, for most of this morning, adding severe floods and more heavy-to-torrential rain was expected over the city and surrounding provinces.

The southwest monsoon, which lasts from June to September, was intensified by an almost stationary tropical storm and a low-pressure area northeast of the northern Philippine province of Batanes.

Tropical storm Trami, with maximum winds of 95km/h near the centre and gusts of up to 120km/h, was expected to move towards northern Taiwan later this week.

Monsoon rains in the Philippines have grown fiercer in recent years.

Last year's deadliest monsoon, also in August, submerged the capital and nearby areas, killing more than 50 people and forcing about 270,000 to seek safer ground. 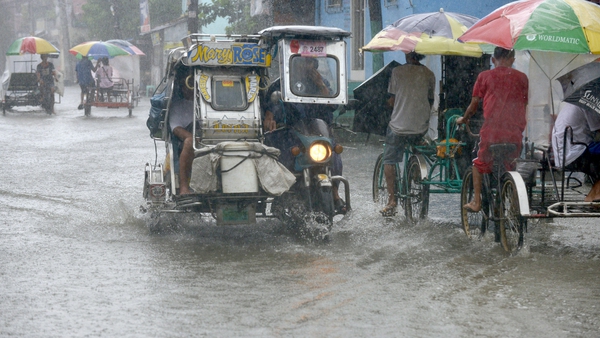