A powerful typhoon has hit the Philippines, triggering landslides and floods.

At least one person has died and 13 fishermen are reported missing.

Typhoon Utor, packing winds of 150km/h near its centre and gusts of up to 185km/h, regained strength as it moved out of northern Luzon island towards the South China Sea.

The coastal town of Casiguran in Aurora province, 343km northeast of the capital Manila, suffered the worst damage, after Utor set off landslides that blocked its only access road.

Local governor Gerado Noveras said around 90% of agriculture was destroyed or damaged, particularly rice and corn crops and coconut plantations.

The national disaster agency said a man clearing a clogged drain was killed when a landslide buried him in Benguet province.

Thirteen fishermen in the coastal provinces of Pangasinan and Camarines Sur were reported missing.

The typhoon is the 12th tropical cyclone this year.

About 20 typhoons hit the Philippines every year, often causing death and destruction.

A state of national calamity was declared last December after typhoon Bopha killed more than 700 people in the south, but most storms make landfall further north. 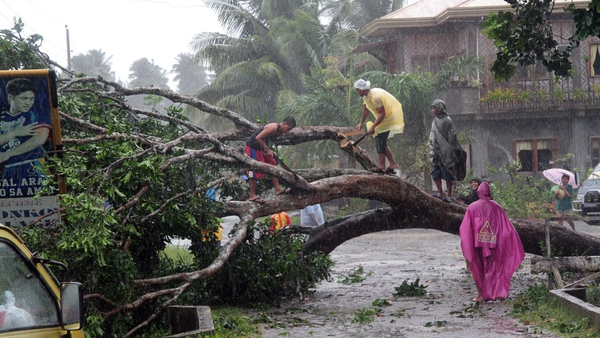