Staff cutbacks at the State Examinations Commission are said to have played a significant role in the unusually high number of errors in this year's Leaving and Junior Certificate examination papers.

In a report, the SEC said the mistakes were the result of human error.

It blamed that error on a large-scale loss of experienced senior staff caused by recent public service reform measures.

Many of the mistakes were found in Maths papers.

The SEC report said that over the past three years, 40% of its staff had left, most through incentivised early retirement schemes.

It said 30% of current senior Exam Assessment Managers have been appointed in the last 12 months.

Overall, staffing at the SEC has been reduced by 15%.

In relation to Maths, the report said the phasing in of a new Maths syllabus led to a massive increase in workload, with just half the normal number of senior staff.

Responding to the report, Minister for Education Ruairi Quinn said he was confident the SEC had a robust system in place to respond to mistakes.

First round CAO offers to almost 50,000 students were posted online at 6am and offers have also been sent by post.

The deadline for accepting first round offers is Monday 26 August.

Last year, nearly all acceptances were made online.

Points requirements this year are relatively similar to 2012.

In many cases, popular courses such as Arts or Science in the major universities show little or no change compared to last year.

While some of the larger business courses show no change, others have seen a points rise.

The points for primary school teaching are down slightly in both St Patrick's and Mary Immaculate College, but the points requirement for primary teaching at NUI Maynooth has risen by 30 points.

The Institute of Guidance Counsellors said offers are made to students who fulfilled the three criteria for admissions: the minimum entry requirements, the specific course requirements and the cut-off points requirement.

Students who achieved the points requirements without meeting the other entry criteria will not be offered a place.

The IGC said students who do not receive any offer may apply for vacant places, which will be posted on the CAO website on 20 August.

The National Parents Council Post-Primary Helpline is staffed by qualified guidance counsellors at 1800-265-165.

The SEC apologised and expressed regret at errors in Leaving and Junior Cert exam papers.

Speaking on RTÉ's Morning Ireland, SEC chairman Richard Langford said the body was "embarrassed" by what had happened and at the impact it may have had on candidates.

He said he was satisfied the commission is "adequately staffed to carry out the core business successfully" and said that approval has been given to fill every critical post that was sought.

However, he said that incentivised early retirement schemes had increased the normal level of staff turnover in critical areas from the expected 5-10% to 30%.

He said people who are going to retire on such schemes often "leave it to the last minute, and you don't fill a gap just as quickly as that".

Mr Langford said that stop-gap measures were in place and they had tried to bring in experienced staff to help, but it was not always possible.

With regards to an error in a maths paper, he said that while the mistake was regrettable, the main task for the commission now is "to try to make sure that whatever undetected errors are there that they don't in fact disadvantage students, so all our attention has been on dealing with the marking process".

He maintained that the overall level of errors was low.

A second level parents' representative group said errors in the exam papers were a direct consequence of insidious cuts that were happening "off the radar".

The National Parents Council Post Primary said it understood how the mistakes had occurred, but it was students who had borne the brunt. 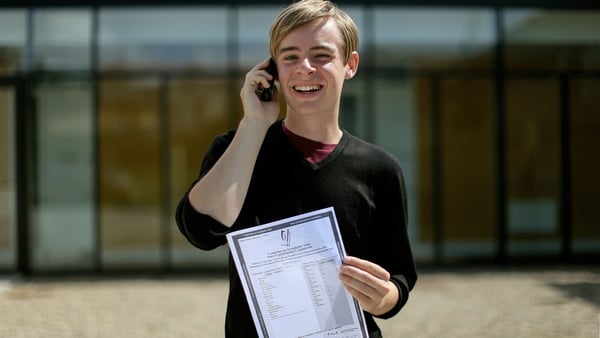 Wait over for Leaving Cert students