Almost 56,000 students have received the results of their Leaving Certificate exams.

The results were available in schools from 9am and were accessible online from midday.

The number of A2 grades on higher level papers was largely unchanged year-on-year, with 15,688 A2s this year.

This year's figures show a strong rise in the number of students opting to sit the Higher Level Mathematics paper.

The positive impact of bonus points for higher level candidates and a new Maths curriculum is evident for a second year running.

The number of students taking Maths at higher level has risen by 17%.

Combined with last year's increase this represents a rise of 58% since 2011.

However, in June the Higher Level Maths paper was a talking point for the wrong reason.

A serious error in the paper led to concerns that students’ results could be affected.

In a statement issued to coincide with today's results release the SEC has again apologised.

It said an examination of papers shows that around 4% of students were thrown by the mistake.

It described detailed measures implemented during the correction of these papers to ensure that no student suffered as a result.

A reorganised exam in Irish, with more marks for the oral component, has also seen more students taking the higher paper.

The number of fail grades on higher level papers increased by just over 200 to 8,354, accounting for 3.8% of all higher level grades.

These students were given an E, F or NG mark.

President of the Institute of Guidance Counsellors Gerry Flynn advised students who may be disappointed with their results to stay calm and consider their options to appeal.

Speaking on RTÉ's Morning Ireland, he said while there was no charge involved in viewing a script, there is a €40 charge to appeal a result, but advised that grades can go down as well as up.

The Migrants Right Centre Ireland (MRCI) has called on the Government to do more to improve access to third-level education for migrants.

The MRCI highlighted the fact that while many young migrants may achieve the points required to progress to third-level, the cost of doing so proves too prohibitive.

The Road Safety Authority has urged students to take care while celebrating their results.

It advised that students make use of public transport where available and make arrangements in advance to make sure they get home safely. 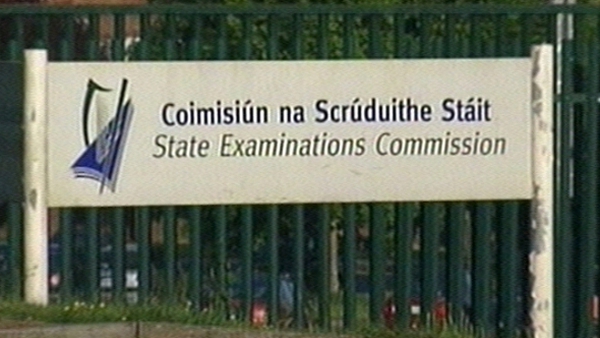 SEC apologises to students over errors in maths papers