Four Irish citizens, who were among hundreds of people besieged in a Cairo mosque after it was surrounded by Egyptian security forces, have now left the mosque, according to reports.

It has now emerged that two of them have been detained by security forces.

Omaima, 21, and Fatima Halawa, 23, were taken by Egyptian security forces when they left the mosque.

Although their mobile phones were taken from them, they managed to borrow one and called their family in Dublin, saying they had been arrested.

The whereabouts of the other two siblings are unknown at this time.

The whereabouts of Somaia, 27, and Ibrihim, 17, are currently unknown.

A spokesperson for the Department of Foreign Affairs said the department  continuing to liaise with authorities in Egypt in relation to the well-being of the four.

The father of the four Halawa siblings is Hussein Halawa - the imam of Ireland's largest mosque in Clonskeagh in Dublin.

Earlier today it was reported that gunfire was heard near the Al Fateh Mosque in the Ramses area of Cairo, which local media says was an exchange between police and Muslim Brotherhood members.

Omaima Halawa told RTÉ the mosque was surrounded and people inside were told by security forces that anyone trying to leave would be shot.

The Halawa siblings travelled to Egypt to holiday at the start of summer with their mother Amina Mostafa, while their father remained in Dublin.

Ms Halawa said conditions inside the mosque were austere with no food, a lack of clean water, dozens of injured people and few medical supplies.

"We are surrounded in the mosque, inside and outside. There is a little hallway that the police forces have entered, have broken in and surrounded us. A few minutes ago they broke in. They threw tear gas at us."

The final-year student at Blanchardstown Institute of Technology said the scene was very frightening.

"There was a group of ladies who left. When they left they were attacked and taken," she said. "We are not safe."

The Halawa siblings were taking part in a demonstration when violence forced them into the mosque at about 7pm last night.

Speaking from their home in Firhouse in Dublin this morning, another sister Nasaybi said it is an extremely difficult situation for the family.

The Halawa family moved to Ireland about 18 years ago.

Somaia is a trainee Montessouri teacher and their brother Ibriham has just completed his Leaving Certificate.

Tánaiste Éamon Gilmore is being kept informed of developments.

Around 60 people are taking part in a solidarity protest at the Egyptian embassy in Dublin.

The rally, hosted by the Irish Anti War Movement, hopes to put pressure on the Irish Government to condemn the massacre of civilians in Cairo. 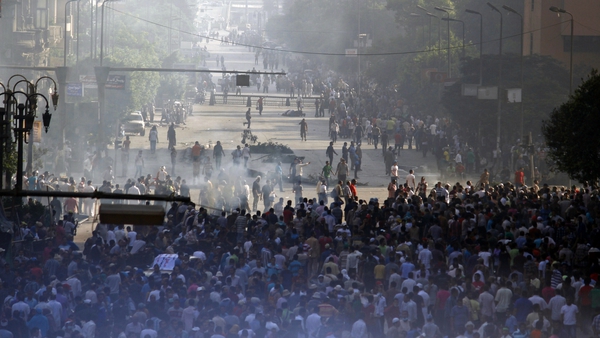