Tánaiste Eamon Gilmore has condemned yesterday's violence in Egypt and called on authorities to exercise restraint.

"I condemn the heavy use of force to clear protests in Cairo, and all violence which occurred yesterday, which has led to serious loss of life and heavy casualties."

It was deeply worrying, he said, that the events "may further polarise society, make an inclusive political dialogue even more difficult, and lead to a continuing spiral of violence".

The Irish Embassy in Cairo remains open, but its opening hours may be restricted if the security situation deteriorates.

Irish citizens are advised to avoid non-essential travel to Egypt, with the exception of the Red Sea resorts.

Any Irish citizens in Egypt and those intending to travel are advised to register on the website of the Department of Foreign Affairs and check for travel advice on a regular basis.

Call to stop 'massacre' in Egypt

Turkey called on the UN Security Council to act to stop the "massacre".

Turkey has emerged as one of the fiercest international critics of what it has called an "unacceptable coup" after Egypt's military toppled president Mohammed Mursi last month.

Turkish Prime Minister Recep Tayyip Erdogan said: "Those who remain silent in the face of this massacre are as guilty as those who carried it out."

He accused the West of double standards in failing to condemn Mr Mursi's ouster.

"Those who ignored this coup, those who could not criticise the coup, and those who even failed to display the honour to call the coup 'a coup' are also responsible for the killing of those innocent children," he said.

The United Nations, the United States and other powers have stopped short of denouncing Mr Mursi's overthrow as a military coup; to do so might trigger automatic sanctions.

An EU envoy involved in mediation efforts that collapsed last week said the authorities had spurned a plan for staged confidence-building measures that could have led to a political solution.

All sides urged to 'step back from the brink'

UN High Commissioner for Human Rights Navi Pillay called on all sides to "step back from the brink of disaster".

Ms Pillay, a former UN war crimes judge, said the death toll pointed to "an excessive, even extreme use of force against demonstrators".

The United States condemned the bloody crackdown and urged Egypt's authorities to respect basic human rights, while European leaders called for restraint and a return to dialogue.

German Foreign Minister Guido Westerwelle condemned the violence during a trip to Tunisia - trying to contain its own crisis after the killing of an opposition figure two years after its president was ousted in the first Arab Spring uprising.

He said the Egyptian government had an obligation to protect peaceful demonstrators and to allow peaceful protests.

Britain said it had called in the ambassador yesterday to express "deep concern at the escalating violence and unrest".

Ecuador also recalled its ambassador to Egypt for consultations.

Pope Francis made an appeal for the end of the violence. "Let us pray together for peace, dialogue, and reconciliation in that beloved land and in the whole world," the pontiff said during his Angelus prayer.

French President Francois Hollande summoned Egypt's ambassador and demanded a quick end to the state of emergency imposed by the military authorities.

Mr Hollande also urged the release of prisoners as a first step towards renewing dialogue, the Elysee Palace said in a statement.

International response 'too little, too late'

Chairman of the Islamic Human Rights Commission Massoud Shadjareh has criticised the international community's response to events in Egypt as "too little, too late".

Speaking on RTÉ's Morning Ireland, Mr Shadjareh said it was ignoring that there had been a military coup in Egypt, and the country was moving towards becoming an authoritarian State.

Mr Shadjareh was critical of the fact that there was, what he described as, an "American-backed military" deposing democratically elected representatives.

He said it was not "the road to democracy", regardless of how good or bad those politicians were.

Mr Shadjareh said that it had also been reported that Saudi Arabia had given $1 billion to the Egyptian military ahead of the ousting of Mr Mursi.

He also said that some authoritarian regimes in the region were benefiting from the unrest in Egypt, which he said was seen as stifling democracy.

Gulf Arab states, which see Egypt as a strategic ally against any threat from non-Arab Iran, celebrated Mr Mursi's departure with palpable relief. 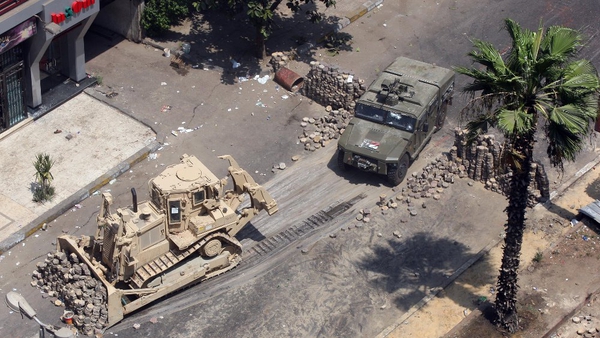