US President Barack Obama has strongly condemned the violent crackdown by security forces in Egypt yesterday.

Egypt's government says 638 people were killed and thousands wounded in the worst day of civil violence in the modern history of the most populous Arab state.

Muslim Brotherhood supporters say the death toll is far higher, with hundreds of bodies as yet uncounted by the authorities.

The UN Security Council is meeting tonight to discuss the situation after a meeting was requested by council members France, Britain and Australia.

Sympathisers of the Muslim Brotherhood are expected to stage protests to denounce yesterday’s security crackdown.

The Brotherhood has called for "a Friday of Anger" in towns and villages across the country.

In a counter move, the National Salvation Front called on Egyptians to protest against what it said was "obvious terrorism actions" conducted by the Brotherhood.

The US State Department has said it would review aid to Egypt "in all forms" and Mr Obama cancelled plans for upcoming military exercises with the Egyptian army.

In an address from his vacation home, Mr Obama said: "We deplore violence against civilians.

"We support universal rights essential to human dignity, including the right to peaceful protest."

The Interior Ministry in Egypt has said security forces would again use live ammunition to counter any attacks against themselves or public buildings.

Families have begun trying to identify hundreds of bodies piled in a Cairo mosque, a day after troops and police crushed protests seeking the return of deposed president Mohammed Mursi.

There were reports of protests today, but no repeat of the previous day's bloodbath.

Supporters of the Muslim Brotherhood stormed and torched a government building in Cairo earlier.

In Alexandria, Egypt's second largest city, hundreds marched, chanting: "We will come back again for the sake of our martyrs!"

Several thousand people gathered in a square outside a mosque being used as a morgue, chanting: "The army and the police are a dirty hand!"

They held up posters of Mr Mursi and shouted: "The people want the execution of the butcher!"

Brotherhood spokesman Gehad El-Haddad said anger within the 85-year-old Islamist movement, which has millions of supporters across Egypt, was "beyond control".

"After the blows and arrests and killings that we are facing, emotions are too high to be guided by anyone," he said.

Cairo and other areas were largely calm last night, after the army-installed government declared a month-long state of emergency and imposed a dusk-to-dawn curfew on the capital and ten other provinces.

It also restored to the army powers of arrest and indefinite detention it held for decades until the fall of Hosni Mubarak in a 2011 popular uprising.

International condemnation rained down on Cairo's military-backed rulers for ordering the storming of pro-Mursi protest camps.

The Brotherhood said it would bring down the "military coup" and remained committed to peaceful activism.

"We will always be non-violent and peaceful. We remain strong, defiant and resolved," Brotherhood spokesman Gehad El-Haddad wrote on his Twitter feed.

However, Interim Prime Minister Hazem el-Beblawi spoke of a "difficult day for Egypt", but said the government had no choice but to order the crackdown to prevent anarchy spreading.

Army chief General Abdel Fattah al-Sisi removed Mr Mursi from power on 3 July in the wake of huge protests by people frustrated at a lack of progress on economic reform and wary of what they saw as a creeping Islamist power grab.

The subsequent crackdown suggests an end to the open political role of the Brotherhood, which survived underground for decades before emerging as Egypt's dominant force after autocrat Hosni Mubarak was toppled in a 2011 uprising.

Shocking scenes, including television footage of unarmed protesters dropping to the ground as security forces opened fire, have been seen around the world.

But many Egyptians stridently support the crackdown and bitterly resent international criticism of the army, underlining how deeply divided society has become.

Churches around the country were attacked and many torched yesterday, manifesting the fear of an Islamist backlash among the Christian minority that makes up 10% of the population of 85 million.

The authorities and their allies, which control nearly all media inside Egypt, insist those inside the pro-Mursi camps were heavily armed.

However, international journalists have seen only limited evidence of weapons beyond sticks and rocks.

A military source said that while sit-ins like the main one outside the Rabaa al-Adawiya mosque in Cairo would no longer be tolerated, marches may be permitted in spite of the state of emergency. 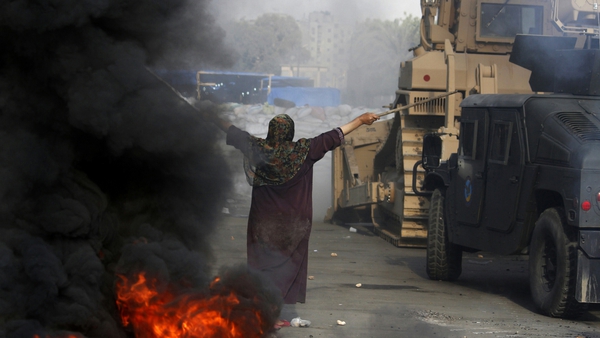