Security sources have said that one Muslim Brotherhood member has been shot dead and at least 11 people wounded at a march in Egypt.

The Islamist group has accused plain clothes police of firing on their protest in Cairo.

The killing could harden the standoff between the Brotherhood, which is demanding the reinstatement of deposed Islamist president Mohammed Mursi, and the army-backed government.

The violence comes as a religious authority said it made some progress in establishing negotiations.

Authorities have so far held back from clearing two Brotherhood protest camps in Cairo.

Thousands of Mursi supporters marched to the Interior Ministry earlier in the day and were confronted by residents who threw stones and bottles and taunted them as "terrorists".

Police fired tear gas at the demonstration, which had brought Cairo traffic to a standstill.

Things remained quiet at the two pro-Mursi protest camps despite the government's frequent demands that protesters end a sit-in that has lasted more than six weeks.

Some officials wish to avoid a bloody showdown that would damage the government's efforts to present itself as legitimate.

However, others in the army and security forces fear they are losing face to the Brotherhood and want to move in.

More than 300 people have already died in political violence since Mr Mursi's overthrow on 3 July.

Senior Brotherhood politician Farid Ismail has said he did not expect the Interior Ministry to break up the encampments by force because of the likely casualty toll.

"It would be a big crime in addition to the crimes already committed, because it will result in a great cost in terms of massacres and dead," he said.

Mr Mursi and other Brotherhood leaders are now in detention after the army moved in, supported by huge demonstrations against his rule. 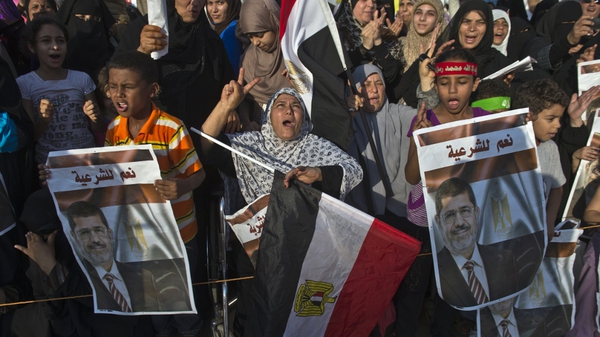