Supporters of deposed President Mohammed Mursi refused to abandon their protest camps in Cairo and said they would fend off any police crackdown with sticks, stones and their faith.

By nightfall, though, the streets of the capital were relatively quiet as the security forces held back from any action despite warnings yesterday that they were ready to dismantle the camps.

Foreign Minister Nabil Fahmy said every effort was being made to resolve the situation through dialogue.

In a political development, the Nour Party said it could join the assembly writing a new constitution for the country, adding Islamist support to the military's political transition plan following its overthrow of Mr Mursi last month.

The crisis brought on by the removal of the Arab nation's first freely elected president is now focused on the protest camps, where thousands of his supporters are demanding his reinstatement.

At the al-Nahda camp, centred round a traffic circle and extending down a palm tree-lined boulevard next to the Cairo zoo, the mood was solemn but not fearful.

A block away, half a dozen armoured troop carriers and a few squads of soldiers were positioned outside a police station, but they did not look like part of a strike force ready to move.

The authorities are keen to end the protests but they held off from acting over the Eid al-Fitr holiday after the Muslim fasting month of Ramadan.

A security source said the delay was also because crowds had swelled the camps after reports of an imminent crackdown.

But Western and Arab envoys and some senior Egyptian government members have pressed the army to avoid using force.

One security official said the protesters would be removed gradually.

Warnings would be issued and police would use water cannon and tear gas to disperse those who refused to budge.

Mr Mursi's defiant supporters have fortified the camps with sandbags and piles of rocks in anticipation of a crackdown.

Thousands were gathered at the biggest camp, near the Rabaa al-Adawiya mosque in northeast Cairo.

At entrances to the site, men with sticks shouted "God is greatest" to keep morale high.

At al-Nahda, protesters had made slits in big steel plates to use as shields.

Seven people were injured at a pro-Mursi march in Cairo when rival groups threw stones and engaged in fist fights.

Almost 300 people have been killed in political violence since Sisi deposed Mursi, including dozens of his supporters shot dead by security forces in two incidents.

On the political front, Nour Party agreed to join the assembly writing a new constitution, but with reservations.

The development is significant as it adds Islamist support to the military's "road map" for new elections in nine months, and further isolates the Muslim Brotherhood.

Nour said it had reservations about the fact that the constitutional amendments would take place under an appointed interim president.

It also wanted certain clauses in the constitution retained.

Egypt has been convulsed by political and economic turmoil since the 2011 uprising that ended 30 years of autocratic rule by US-backed President Hosni Mubarak.

There is deepening alarm in the West over the course taken by Egypt, which sits astride the Suez Canal and receives $1.5bn a year in mainly military aid from the US.

Mr Mursi became president in June 2012. But concerns he was seeking an Islamist autocracy and his failure to ease economic hardships led to mass rallies prompting the army to oust him.

Since then Brotherhood leaders have been jailed.

Mr Mursi is detained in an unknown location. 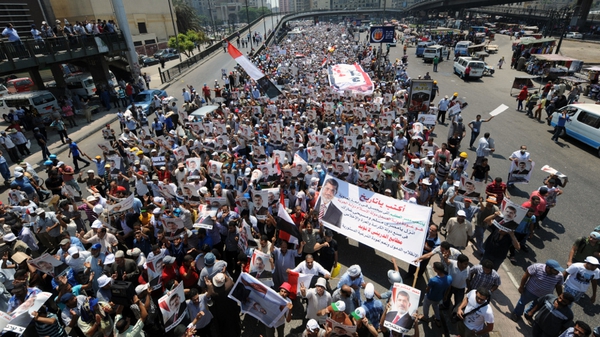 US in pledge to aid Egyptian transition