The United States said it would work with other nations to resolve Egypt's crisis peacefully.

US Secretary of State John Kerry also urged Egyptian authorities to give demonstrators the space to protest in peace.

The meeting appeared to signal a new diplomatic effort to end the crisis in which more than 300 people have been killed.

The army removed former president Mohammed Mursi and his Muslim Brotherhood from power on 3 July in response to mass protests against his rule.

The Brotherhood has escalated its protest campaign by announcing two new sit-ins and three marches to sensitive security facilities.

Its supporters clashed with police during a protest near a complex of television studios outside Cairo.

State media reported army helicopters overhead and said two policemen were wounded by birdshot in what it described as an attempt to storm the complex.

State TV reported that the Interior Ministry would impose a cordon around two large pro-Mursi Cairo sit-ins within 48 hours and that the police did not want to break them up by force.

Following the deaths of around 80 Mursi supporters on Saturday when security forces opened fire near one of the sit-ins, government pledges of action have raised concerns of more casualties.

By pushing back any move to break up the sit-ins, the government has given the mediation effort a chance.

Mr Mursi has been in detention since he was deposed and is facing a judicial inquiry into accusations of murder and conspiring with the Palestinian group Hamas.

The biggest sit-in is in northeast Cairo, where several thousand Mursi supporters have been camped out for more than a month in a protest that at times swells to tens of thousands. 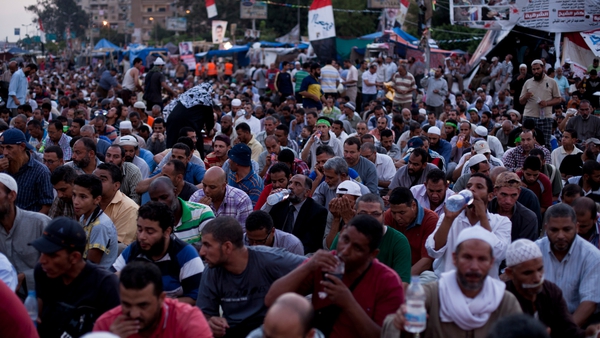