The European Union’s foreign policy chief Catherine Ashton has pressed Egypt's rulers to step back from a growing confrontation with the Muslim Brotherhood of deposed Islamist president Mohammed Mursi.

The calls come two days after at least 80 of Mr Mursi's Muslim Brotherhood supporters were gunned down in Cairo.

Raising the prospect of more bloodshed, the Muslim Brotherhood said it would march again this evening on Interior Ministry offices across the country.

Ms Ashton became the first overseas envoy to visit Egypt since Saturday's carnage, the second mass killing of Mr Mursi’s supporters by security forces since the army ousted him on 3 July.

The bloodshed has raised global anxiety that the army may move to crush the Muslim Brotherhood.

Ms Ashton, on her second trip to Egypt since Mr Mursi's fall, met General Abdel Fattah al-Sisi, the head of the army and the man behind the overthrow of Egypt's first freely-elected president.

Earlier, Ms Ashton said she would press for a "fully inclusive transition process, taking in all political groups, including the Muslim Brotherhood".

In comments carried by the MENA state news agency, Mr ElBaradei said he had told Ms Ashton that the new leadership was doing all in its power to "reach a peaceful way out of the current crisis, that preserves the blood of all Egyptians".

Thousands of its supporters have camped out for a month at the Rabaa al-Adawiya mosque in northern Cairo.

They are demanding Mr Mursi's reinstatement and defying threats by the army-backed authorities to remove them.

Brotherhood spokesman Gehad El-Haddad said before the meeting with Ms Ashton: "It's very simple, we are not going anywhere, we are going to increase the protest and multiply the sit-ins. Someone has to put sense into this leadership." 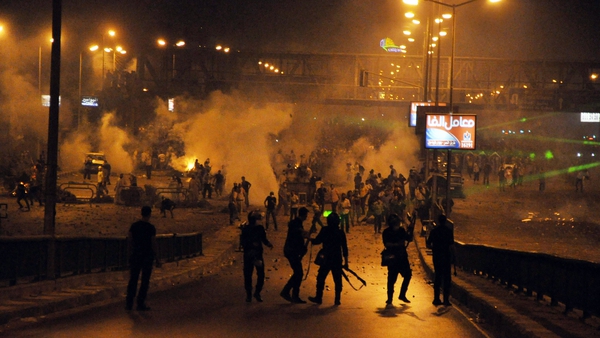