Dublin Bus is operating a full schedule today, after a three-day strike was suspended at the company last night.

Talks are under way at the Labour Court following an invitation to all parties to try to find a solution to the dispute over the company's cost-cutting plan.

Speaking on his way into the Labour Court, NBRU Assistant General Secretary Dermot O'Leary said his union was going into the talks in a positive mood.

He said he was looking for confirmation on exactly how long the cost cutting measures would be in place and also the size of the contribution management grades will make.

SIPTU's Willie Noone said the talks would be difficult and there would have to be some movement on the cost saving measures to make them acceptable.

Philip Donohue, head of Human Resources at Dublin Bus, said he was hopeful of a resolution.

He said it was critical that the necessary savings are achieved and the company has lost €600,000 over the course of the three day strike which he described as regrettable.

Earlier, Minister of State with special responsibility for Public and Commuter Transport Alan Kelly urged both sides to go into the talks with "an open mind" and in "solution mode".

Speaking on RTÉ's Morning Ireland, Mr Kelly said his department had been watching the situation over the last three days, and he was glad the Labour Court made its intervention.

He said he believes both sides will be able to thrash out a compromise that will mean savings for Dublin Bus that will protect its future and protect its jobs.

Mr Kelly said that both sides need to have clarity.

The strike has cost the company €1m in lost revenue since Sunday.

Staff who were on strike have not been paid wages.

But it has also affected hundreds of thousands of commuters, as well as businesses in the capital.

While the talks are under way, the situation at the company reverts to the way it was before cost-cutting measures were introduced. 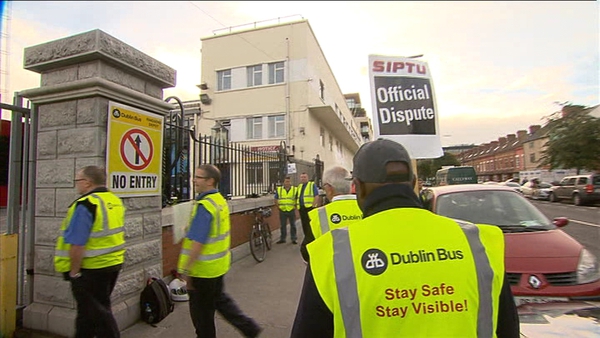