Both sides in the Dublin Bus dispute have agreed to attend talks tomorrow to try resolve the row that has led to a three-day strike.

The purpose of the talks is to see if there is a basis for a solution at this time.

Dublin Bus said it is suspending the implementation of its cost cutting measures to "enable these talks to proceed".

A full bus service will operate across Dublin city tomorrow.

The National Bus and Rail Union has also accepted the invitation to attend exploratory talks tomorrow.

Earlier, Minister for Transport Leo Varadkar said he will not intervene in the Dublin Bus dispute.

Speaking on RTÉ's News at One, Mr Varadkar said: "There was a time in the past when ministers would intervene personally and directly to solve the problem with taxpayers' money.

"That's not the way Ireland works any more, and its never going to work like that again."

The minister said what was required was an intervention by the Labour Court or Labour Relations Commission "but that will only be done when the conditions are right."

Dublin Bus services are not running today with an estimated 400,000 commuters affected by the disruption across Dublin city and county.

The dispute, involving the National Bus and Rail Union and SIPTU, centres on the introduction of a cost-cutting plan designed to save nearly €12m.

The NBRU has said that members are prepared to meet Dublin Bus management after Government intervention.

Earlier, speaking on RTÉ's Morning Ireland, company spokesperson Clíodhna Ní Fhátharta said: "There is scope for change but it must be on the basis of making savings for the organisation."

Speaking on the same programme, NBRU spokesperson Dermot O'Leary said: "Our members are willing to sit down and talk with management but it's up to Government ministers to intervene."

The NBRU has previously said it had not ruled out the possibility that the strike may extend to Iarnród Éireann.

Minister of State with responsibility for Public and Commuter Transport Alan Kelly has said he believes the issues between workers and management are "not insurmountable" and "can be solved".

In a statement, he said: "Both sides must engage with each other through the Labour Relations Commission to address them."

Iarnród Éireann said intercity, commuter and DART services will run as normal, as will the Luas.

However, both Iarnród Éireann and Luas have said they will not accept Dublin Bus tickets.

The Department of Transport has confirmed that bus lanes will remain closed to private motorists during the strike.

Businesses in Dublin city centre are potentially losing millions of euro a day as the Dublin Bus strike continues, according to traders.

He said if they chose not to do so during the strike, businesses would lose out badly.

"Almost half the people you see on O'Connell Street or on Grafton Street/Henry Street have come in on a bus.

"On an ongoing basis, the city centre - between shopping, and pubs and restaurants - will turn over about €10m a day. So if we lose 10% to 20% of that, the maths is clear - the city could lose millions every day."

Mr Guiney said the consequences were too significant to let the strike go on.

Dublin Bus has said the strike will cost the company €600,000 each working day. 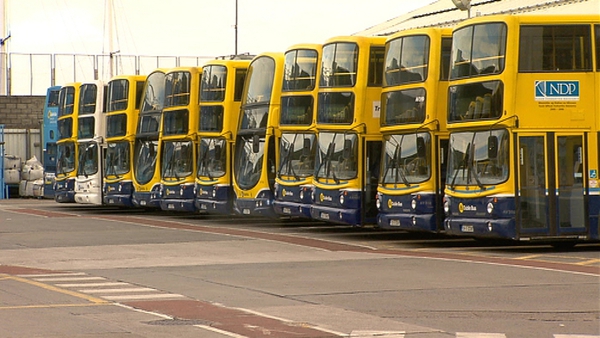