The strike by the National Bus and Rail Union and SIPTU is in protest at the company's cost-cutting plans.

The Department of Transport confirmed that bus lanes will remain closed to private motorists tomorrow.

Dublin Bus said the strike, which began yesterday, will cost the company €600,000 each working day.

The Dublin City Business Association has already warned that the strike is taking place at the height of the capital's tourism season.

Irish Rail said intercity, commuter and DART services will run as normal, as will the Luas.

However, both Irish Rail and Luas have said they will not accept Dublin Bus tickets.

Earlier, the NBRU said it had not ruled out the possibility that the strike may extend to Irish Rail.

NBRU Assistant General Secretary Dermot O'Leary said ministers had been making statements about the strike in recent days and it would be more beneficial for all concerned if they backed up those statements by action.

Dublin Bus has said proposed savings of €11.7m have to be made.

Company spokeswoman Clíodhna Ní Fhátharta said the company is available to talk, but only on the basis of implementing cost savings.

Speaking on RTÉ's Morning Ireland, she said it is "untrue" to say that workers were not aware that executive and management grades were facing pay cuts under cost-cutting plans.

Ms Ní Fhátharta said both sides in the dispute had been in negotiations about the issue and said they knew about these pay cuts.

She said management had sat down with trade unions and modified proposals and gone through all the industrial relations processes, which resulted in a Labour Court recommendation in June.

But Mr O'Leary said there was no mention of executive and management grades pay cuts in the Labour Court submission.

Minister for Transport Leo Varadkar has called on the unions to end the action.

He said the industrial action is targeting people in Dublin for whom there is no alternative to public transport in many cases.

If the strike continues into next week, he said, it will "threaten the jobs of people in Dublin who don't have the job security or protection that Dublin Bus workers do".

Meanwhile, Fianna Fáil Transport Spokesman Timmy Dooley has said Taoiseach Enda Kenny must be prepared to intervene in the dispute.

Mr Dooley said he was astonished by what he called the "hands off approach" taken by Mr Varadkar, and claimed that lack of leadership was exacerbating the problem. 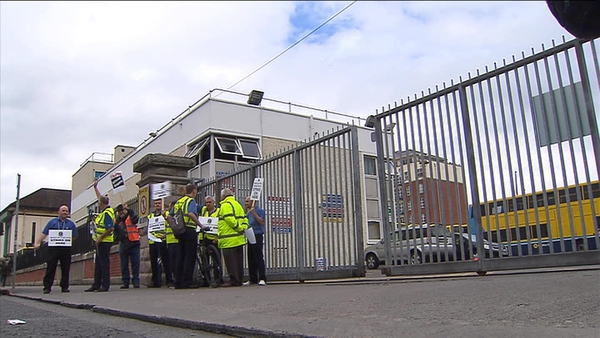 Dublin Bus has said that services are not operating tomorrow, Bank Holiday Monday