The cost of cleaning and repairing damages caused by the flooding could run to millions of euro.

The Emergency Department remains closed and patients are being diverted to Sligo Regional Hospital and Altnagelvin Hospital.

The hospital is closed to all visitors.

Many areas have been soiled and damaged by flooding and the hospital wishes to avoid the risk of contamination and the spread of infection.

Local authority fire services were called to pump the water from the building.

The hospital's general manager, Sean Murphy, said it had been "a very difficult situation".

He thanked hospital staff, the fire service, the council, the army and the gardaí for their help in trying to manage it.

Specialist cleaning teams are on site while others will be in place over the weekend.

Mr Murphy also paid tribute to the 500 volunteers who helped the clean-up operation last night and said the staff had been terrific.

It is expected that the ban on visitors to the hospital will remain in place over the weekend.

Elsewhere in the town, graves in Conwal Graveyard were damaged when a river burst its banks. 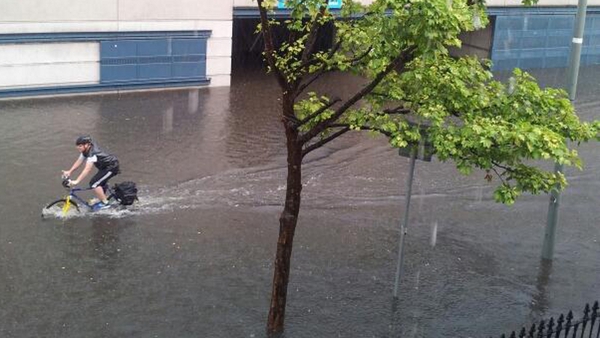