The Seanad has passed the bill providing for a referendum on its own abolition.

The referendum will take place on Friday 4 October.

That means the campaign will begin once the Dáil resumes two weeks earlier.

The final stages of the debate heard strong criticism of the Government's proposal from Fianna Fáil and Independent Senators.

Speaking before the final vote, Independent Senator David Norris accused the Government of sleight of hand, dishonesty and Machiavellian conniving in its conduct, describing the legislation as a "piece of rubbish".

Fianna Fáil Seanad leader Darragh O’Brien said it was the greatest act of political vandalism in the history of the State.

Fianna Fáil Senator Mary White has criticised three of the Taoiseach's nominees to the Seanad for backing the Government's measure to hold a referendum on the Seanad's future.

Comparing the measure to the Act of Union and the end of Grattan's Parliament, she said those independent Senators supporting it could no longer describe themselves as independents.

Senator White said the abolition of the Seanad would increase the power of the Government and described it as a shameful proposal.

She expressed the hope that Fine Gael’s director of elections for the referendum campaign, Richard Bruton, would be "crucified".

Her Fianna Fáil colleague Labhrás Ó Murchú said reform should be put forward as an alternative to abolition.

He said nobody is arguing against a referendum, but said the people should have the maximum information possible. 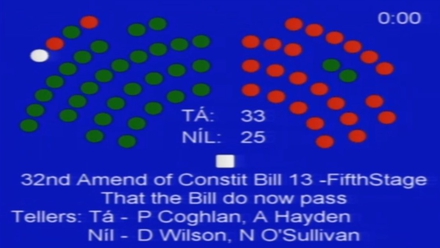 Mr Ó Murchú said the people were being asked to "buy a pig in a poke" in the proposed referendum, and asked whether this was the way to enhance the body politic.

He claimed the abolition of the Seanad had become a bigger issue than the Seanad itself,but has shone a light into the workings of Government.

Senator Gillian van Turnhout, who is supporting the Government’s referendum plan, said the future of the Seanad was a question for the people and the people alone.

If Senators were to vote to delay the proposal, they should also have voted to delay the cut in respite care grants, she said.

She said she could not have it on her conscience that the first piece of legislation that she voted to delay was this measure.

Fianna Fáil's Diarmuid Wilson claimed that Government Senators had been promised projects in their constituencies on condition they supported abortion legislation and the Seanad referendum bill.

Labour's Aideen Hayden said it would be dishonest for any Government Senator to oppose the bill, as they knew the proposal was part of the Programme for Government.

Minister of State Brian Hayes described as "pitiful" suggestions from Senators that the Taoiseach has behaved like a dictator engaged in a power grab in his plans to abolish the Upper House.

He told the Seanad that the people will decide the future on the Seanad, not a group of politicians who fear their career plans might be upset.

Earlier, independent Senator Fergal Quinn said there were over 70 references to the Seanad in the Constitution, and deleting them would "devastate" the country's fundamental law.

Elsewhere, Fine Gael TD Regina Doherty has said it does not look like she will get an apology from Senator David Norris for the comments he made about her in the Seanad last week.

In a heated debate earlier this month, Mr Norris said Ms Doherty was "talking through her fanny" and referred to the "Regina monologues". 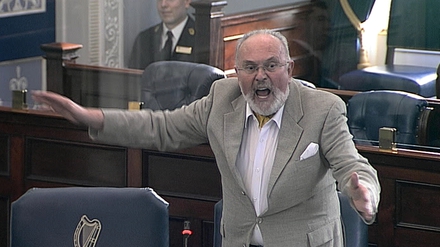 Speaking on RTÉ's Today with Pat Kenny, Ms Doherty said that while Mr Norris claimed he wanted a "courteous and respectful" debate on the proposed referendum on Seanad abolition, the most courteous and honest thing that he could do would be to apologise to her.

Ms Doherty is Fine Gael’s deputy director of elections for the referendum.

Speaking on the same programme, Mr Norris said he has no regrets over the comments he made about Ms Doherty.

He also criticised remarks made in the media that made reference to his current health, in the fallout from his comments about Ms Doherty.

Mr Norris said: "Non, je ne regrette rien. I don’t regret anything except the simpering hypocrisy of people who wrote about me in the media, and started off with they were so sorry, about my brave fight for cancer, all the rest of it.

"I don't like hypocrisy. Leave my illness out of it. If you're going to stab me, stab me cleanly without any old blathery, hypocritical crocodile tears."

He also objected to a recording of his comments being replayed on air.

He called on people to vote against the Government’s proposals to abolish the Seanad.

Walsh not surprised by Naughton nomination

Separately, Galway West TD Brian Walsh has said the nomination of a constituency colleague to the Seanad does not come as a surprise to him. 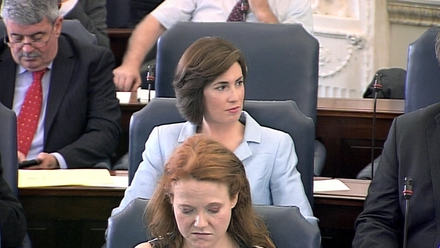 The former Galway mayor was a Fine Gael candidate in the last general election.

Mr Walsh said he was under no illusion that the move was "geared at him".

He said it had been suggested to him that such an appointment would be made during negotiations prior to the vote on the Protection of Life During Pregnancy Bill.

Mr Walsh lost the Fine Gael party whip after voting against the bill.

He wished Senator Naughton every success in her new role and said he was sure she would make a valuable contribution to the Oireachtas.

Mr Walsh said he still hopes to be a Fine Gael candidate in the next election and it is his intention to go before the local party selection convention to secure a nomination.

If he fails to be selected or if his candidacy is not ratified by party headquarters, Mr Walsh said he will run as an independent. 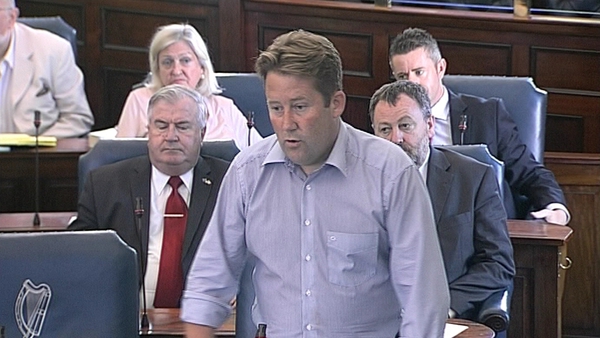