The Protection of Life During Pregnancy Bill has moved a step closer to completing its passage through the Oireachtas after it passed committee stage in the Seanad tonight.

The legislation was passed by 33 votes to 14.

Report Stage of the Bill will begin in the Seanad on Monday.

There were some bitter exchanges in the Upper House today.

Two Fianna Fáil Senators were even admonished by the party's Seanad leader.

Darragh O'Brien said comments by some of his colleagues were upsetting, too graphic and lacked compassion.

Senator Jim Walsh responded by saying that no one had a monopoly on conscience or morality, while Brían Ó Domhnaill said those opposing the legislation were castigated every time they opened their mouths.

Earlier, a clearly upset Labour Senator Marie Moloney described losing a baby. She criticised some senators over the tone of the debate.

The final amendments looked at by senators tonight dealt with the controversial section 9 of the bill, which allows for an abortion if a mother's life is at risk from the threat of suicide.

Several senators expressed grave reservations about the suicide clause, but Senator John Crown said people had, in a clearly-worded referendum, voted not to exclude suicide as grounds for a legal abortion. 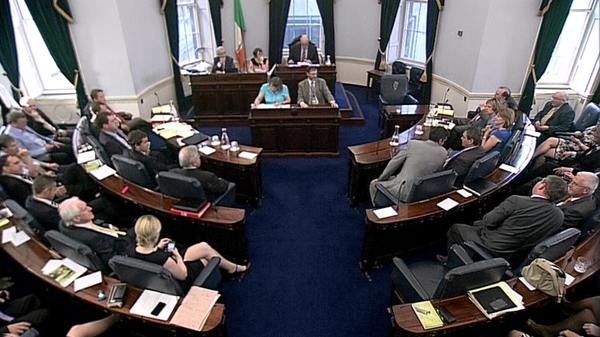