The Government has won a crucial vote in the Seanad, thanks to the support of three independents appointed to the Upper House by the Taoiseach.

Fiach MacConghail, Jillian van Turnhout and Marie Louise O'Donnell backed the Government in a vote on the legislation providing for a referendum on the abolition of the Seanad.

Independent Senator Fergal Quinn was seeking to "recommit" the legislation, sending it back to committee stage for further consideration.

His move was backed by Fianna Fáil, Sinn Féin, all the university Senators, by independents Katherine Zappone and Mary Ann O'Brien, and by the two Senators expelled from Fine Gael over the abortion legislation; Paul Bradford and Fidelma Healy Eames.

However, with the help of the three independents, the Government defeated Senator Quinn's amendment by 31 votes to 27.

In a tweet, Senator van Turnhout said it was "a tough vote", but she voted with her conscience, and her commitment not to impede the passage of the legislation. 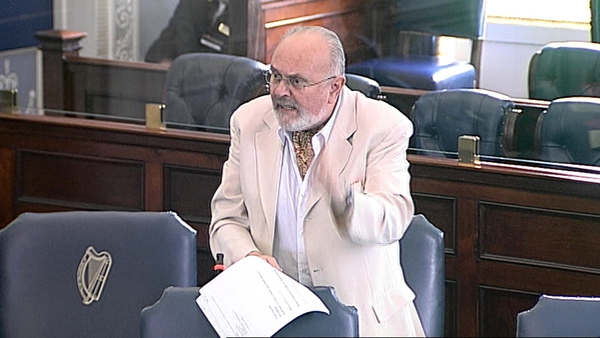 Formal complaint to be made over 'sexist' Norris comments