A formal complaint is to be made to the Leader of the Seanad following comments by Independent Senator David Norris.

Fine Gael TD Regina Doherty, the party's deputy director of elections for the Seanad referendum campaign, said she was "upset by the personal nature" of the remarks made about her, which she said were "contrived and intentional".

Ms Doherty accused the Senator of "sexist and inappropriate language".

During a discussion on the abolition on the Seanad, Senator Norris complained of long-serving members of the upper house having to listen to "the Regina Monologues" from a deputy who "wasn't a wet week" in the Dáil.

He also accused her of "talking through her fanny".

Earlier, director of elections Minister Richard Bruton had announced details of the Fine Gael campaign for October's referendum and repeated Government claims that abolition would save €20m a year.

Senator Norris described a press release by Mr Bruton as a "malignant and mendacious piece of tripe".

Seanad Cathaoirleach Paddy Burke said that Senator Norris was "completely out of order".

Senator Norris responded: "Yeah, but we should have a revolution in this bloody place."

Fine Gael Senator Tony Mulcahy accused the Government of telling "an absolute lie" about how much money abolishing the Seanad would save.

He rejected claims that the abolition would save €20m a year and said the only saving would be in Senators' salaries.

Fine Gael Senator Terry Brennan claimed there are "lies" and "'total lies" in Minister Bruton's statement about the costs of the Seanad.

He was forced to withdraw the "lie" remark and changed it to "allegation".

Fine Gael Senator Martin Conway, who is partially sighted, said the Seanad had done a lot for people with disabilities.

He criticised Mr Bruton for suggesting the money saved from abolition could be diverted to people with disabilities.

Senator Mulcahy called for a full report on the potential savings to be presented to the Seanad before 7pm on Wednesday evening, when the house is due to debate the final stage of the legislation providing for a referendum on its abolition.

Taoiseach Enda Kenny said it was difficult to put an exact figure the cost of the Seanad, but the savings over a ten-year period would be very considerable.

Mr Kenny emphasised that the question being put before the people is only one part of a major change in Irish politics and that the abolition of the Seanad was not just about cost.

According to the Oireachtas Commission, the annual direct cost of the Seanad is €8.8m, with a further €9.3m in indirect costs and €2m in pension costs.

How much of the indirect cost will actually be saved is likely to be a hotly contested issue during the referendum campaign.

Minister Bruton earlier said Fine Gael would not be complacent about the result and would be putting forward a very strong message to voters.

Ms Doherty said everybody in Ireland was being asked to do more with less and the political system must do the same. 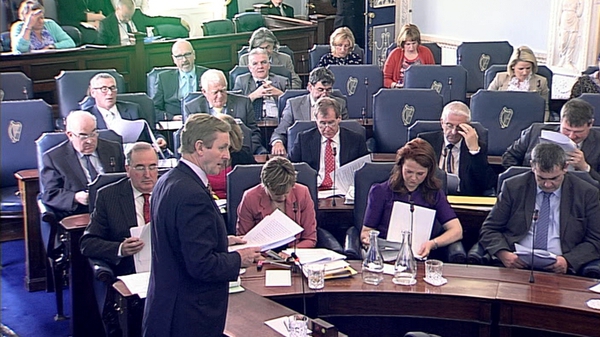 Seanad has not reformed in 75 years, Enda Kenny tells senators