It charged them with inciting violence in a clash that saw troops shoot dozens of his supporters dead.

Brotherhood spokesman Gehad El-Haddad said the announcement of charges against leader Mohamed Badie and several other senior Islamists was a bid by authorities to break up a vigil by thousands of Mursi supporters demanding his reinstatement.

This week's unrest has alarmed Western donors and Israel, which has a 1979 peace treaty with Egypt.

The US Washington has neither welcomed Mr Mursi's removal nor denounced it as a "coup".

Under US law, a coup would require it to halt aid, including the $1.3 billion it gives the army each year.

The Brotherhood's downfall has, however, been warmly welcomed by three of the rich Arab monarchies of the Gulf, who showered Cairo with aid to prop up the collapsing economy.

The Brotherhood leaders were charged with inciting violence in Monday's shootings, which began before dawn, when the Brotherhood says its followers were peacefully praying.

The army says terrorists provoked the shooting by attacking its troops.

According to security sources, 57 people died including 53 protesters and four members of the security forces.

Mr Haddad said the Brotherhood leaders had not been arrested and some were still attending the protest vigil at Rabaa Adawiya mosque.

The charges against them were "nothing more than an attempt by the police state to dismantle the Rabaa protest".

"What can we do?" he asked. "In a police state, when the police force are criminals, the judiciary are traitors and the investigators are the fabricators, what can one do?"

In addition to Mr Badie, prosecutors ordered the arrest of others including his deputy, Mahmoud Ezzat, and outspoken party leaders Essam El-Erian and Mohamed El-Beltagi.

The prosecutor also ordered 206 Brotherhood activists arrested after Monday's violence to be detained for a further 15 days on accusations of involvement in the killings.

Despite the violence that followed Mr Mursi's removal, the interim authorities are proceeding with the army's "road map" to restore civilian rule.

Mr Bahaa el-Din, a former head of Egypt's investment authority, has been touted for senior posts.

Both are prominent figures in the National Salvation Front, the main secularist group that led protests against Mr Mursi.

They also support a stalled $4.8bn loan deal with the International Monetary Fund, which would require Egypt to make politically painful reforms to subsidies for food and fuel that support its 84 million people but drain its public finances.

Mr Beblawi accepted that it would be a challenge to find a cabinet line-up with universal support.

"I don't believe that anything can have unanimous approval," he said.

Mr Beblawi has indicated he would be open to offering cabinet posts to Islamists, including Brotherhood figures.

The Brotherhood says it will have nothing whatsoever to do with a government of what it calls a "fascist coup".

Both sides of Egypt's divide have become fiercely anti-American.

Mr Mursi's opponents say President Barack Obama's administration supported the Brotherhood in power, while Mr Mursi's supporters believe the US was behind the plot to unseat him.

Secularist posters depict the US president as a bearded Brotherhood member and call Cairo ambassador Anne Patterson - who spoke against street protests against Mr Mursi - a "witch".

To Islamists, Obama's refusal so far to label the military takeover a "coup" shows he is a hypocrite in promoting democracy.

White House spokesman Jay Carney, who voiced confidence in the ambassador, said it was still too soon to conclude whether the takeover was a coup: "We are evaluating how the authorities are responding to and handling the current situation," he said.

But aid has not been suspended. The Pentagon said a planned delivery four F-16 fighters to Egypt would take place soon.

The promised $12bn in aid from the Gulf states will go a long way to easing a deep economic crisis that has driven Egypt's finances to the brink during two and a half years of instability since autocrat Hosni Mubarak was swept from power.

The funds also reduce the incentive for Egypt to make the reforms the IMF says are needed to stabilise public finances, attract investment and rekindle economic growth.

In other steps on their "road map", the authorities have announced a temporary constitution, plans to amend it, and a timetable for elections beginning in about six months.

The secularist NSF initially rejected the interim constitution, as did Islamists and others, although today the NSF withdrew its rejection and issued a new, milder criticism.

Authorities also named a chief prosecutor, replacing Mr Mursi's appointee who was pushed out last week by a court that briefly reinstated his Mubarak-era predecessor.

With the Brotherhood sidelined, the authorities are courting the second largest Islamist group, the ultra-orthodox Nour Party, to demonstrate that Islamists will not be suppressed as they were during six decades of military-backed rule.

Nour officially withdrew from politics in response to Monday's violence but has said it does not object to Mr Beblawi's appointment and will assist his government.

Nour spokesman Nader Bakkar said the group would not accept posts in the new cabinet. 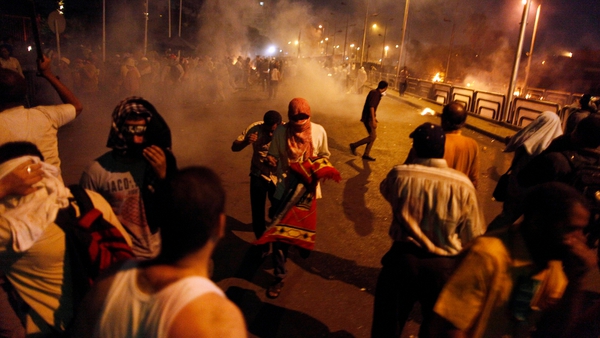