Egypt will hold new parliamentary elections once amendments to its suspended constitution are approved in a referendum, the interim head of state has decreed, setting out a timeframe that could see a legislative vote in about six months.

A presidential election would be called once the new legislative chamber convenes, the decree said.

It set a four-and-a-half month timeframe for amendments to the country's controversial, Islamist-tinged constitution that was passed into law in December.

That constitution was suspended last week when the army removed Islamist President Mohammed Mursi from power following mass protests against his rule.

Egypt's Muslim Brotherhood and its Islamist allies called for more protests tomorrow, after 51 people were killed at a complex in Cairo today.

The deaths occurred when the army opened fire on supporters of Mr Mursi.

Mr Mursi’s supporters blame the military for opening fire on them outside the Republican Guard compound where the former president is believed to be held.

He was ousted by the military last Wednesday.

The military said "a terrorist group" tried to storm the Republican Guard compound and one army officer had been killed and 40 wounded.

Soldiers returned fire when they were attacked by armed assailants, according to a military source.

Hatem Azam, a spokesman for a coalition led by the Muslim Brotherhood, told a news conference: "In protest against the military coup that was followed by suppressive actions, topped by the Republican Guard massacre that took place at dawn, we call on all citizens and honourable people to protest on Tuesday across Egypt."

As an immediate consequence of today's clashes, the ultra-conservative Islamist Nour party, which initially backed the military intervention, said it was withdrawing from talks to form an interim government for the transition to new elections.

A spokesman for the interim presidency, Ahmed Elmoslmany, said work on forming the government would go on, though Nour's withdrawal could seriously undermine efforts at reconciling rival factions.

"What happened will not stop steps to form a government," he said.

The military has said that the overthrow was not a coup, and it was enforcing the will of the people after millions took to the streets on 30 June to call for Mr Mursi's resignation.

But pro- and anti-Mursi protests took place in Cairo, Alexandria and other cities, and resulted in clashes on Friday and Saturday that left 35 dead.

Footage broadcast by Egyptian state TV showed Mursi supporters throwing rocks at soldiers in riot gear on one of the main roads leading to Cairo airport.

State-run television showed soldiers carrying a wounded comrade along a rock-strewn road, and news footage zoomed in on a handful of protesters firing crude handguns during clashes.

The rest of the city was for the most part calm, though armoured military vehicles closed bridges over the Nile to traffic following the violence.

The Brotherhood denounced the intervention as a coup and vowed peaceful resistance.

Nour, Egypt's second biggest Islamist party, which is vital to give the new authorities some Islamist backing, said it had withdrawn from the negotiations in protest at what it called the "massacre at the Republican Guard [compound]".

"The party decided the complete withdrawal from political participation in what is known as the road map," it said.

The military cannot afford a lengthy political vacuum at a time of violent upheaval and economic stagnation.

Scenes of running street battles between pro- and anti-Mursi demonstrators in Cairo, Alexandria and cities across the country have alarmed Egypt's allies, including key aid donors the United States and Europe, and Israel, with which Egypt has had a US-backed peace treaty since 1979.

The violence has also shocked Egyptians, growing tired of the turmoil that began two-and-a-half years ago with the overthrow of autocrat Hosni Mubarak in a popular uprising.

In one of the most shocking scenes of the past week, video footage circulated on social and state media of what appeared to be Mursi supporters throwing two youths from a concrete tower on to a roof in the port city of Alexandria.

The images, stills from which were published on the front page of the state-run Al-Akhbar newspaper yesterday, could not be independently verified.

Yesterday, huge crowds numbering hundreds of thousands gathered in different parts of Cairo and were peaceful, but nonetheless a reminder of the risks of further instability.

For many Islamists, the overthrow of Egypt's first freely-elected president was a bitter reversal that raised fears of a return to the suppression they endured for decades under autocratic rulers such as Mubarak.

On the other side of the political divide, millions of Egyptians were happy to see the back of a leader they believed was orchestrating a creeping Islamist takeover of the state - a charge the Brotherhood has vehemently denied.

The US has not condemned the military takeover or called it a coup, prompting suspicion within the Brotherhood that it tacitly supports the overthrow.

US President Barack Obama has ordered a review to determine whether annual US assistance of $1.5bn (€1.17bn), most of which goes to the Egyptian military, should be cut off as required by law if a country's military ousts a democratically-elected leader.

Egypt cannot afford to lose foreign aid. The country appears headed for a looming funding crunch unless it can quickly access money from overseas.

The local currency has lost 11% of its value since late last year.

Around 60 members of the Egyptian community in Ireland have gathered in Dublin this evening to protest about the ousting from power of Mr Mursi.

One of the organisers, Mohammed Khshabah, described the removal as a coup perpetrated against the democratically elected president.

The demonstrators are calling for Mr Mursi to be reinstated and for the arrests of his supporters to cease. 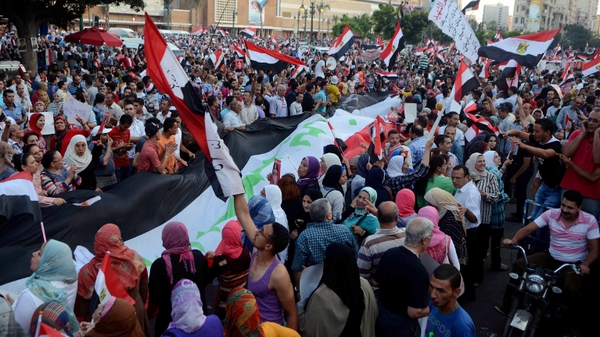 Thousands gather in Cairo and Alexandria