A third Fine Gael TD has confirmed that he will not support the Government's Protection of Life During Pregnancy Bill.

Wicklow TD Billy Timmins said he could not support the bill on the basis of the inclusion of suicidal threat as a basis for a termination.

He said he was worried by the opposition of medical specialists to this aspect of the bill.

Brian Walsh and Peter Mathews have already confirmed their opposition.

The debate on the Protection of Life During Pregnancy Bill 2013 resumed in the Dáil this morning.

He said he is concerned that there is no timeline in the legislation, so if somebody pledges they are suicidal they could have an abortion in the late term of a pregnancy.

Minister for Education Ruairi Quinn said that as the second longest serving TD in Leinster House, he welcomed the bill.

He said he hoped that the stream of women who are going to the UK for abortions will be reduced by the legislation.

Mr Quinn pointed out that the bill will, when enacted, still not be compulsory; people who abhor abortion will not be compelled to avail of its provisions.

Independent TD Thomas Pringle said that he recognises the bill marks progress but said we should also be legislating for women who get pregnant through rape and for foetal abnormalities.

He said the Dáil cannot legislate for rape without a referendum but added that there is scope for legislating for foetal abnormalities without having to change the constitution.

He said it is correct to have no time limit on the bill. If there was a timeframe, women and their babies could be legally left to die and this would contravene the protection of life, he added.

It is a flawed argument to suggest that women might fake suicidal ideation, Mr Pringle said.

Sinn Féin's Mary Lou McDonald said she recognised that this is a difficult debate for many, but commended Labour and Fine Gael for introducing the legislation.

A vast number of citizens support this legislation, she argued.

Labour TD Michael McNamara welcomed the legislation, but warned that the bill may be found to be unconstitutional.

He said the last thing that is needed is for the bill to be referred to the Supreme Court and found to be unconstitutional.

Independent TD Seamus Healy welcomed the bill, but said it was limited and restrictive.

Sinn Féin leader Gerry Adams said he is not personally in favour of abortion, but he has a responsibility to legislate for citizens, and he said Sinn Féin will support the bill.

Fine Gael's Michael Creed said he agrees with proceeding with the legislative route.

Fianna Fáil's Niall Collins said he is supporting the bill, not just as a legislator but also as a husband and father.

Supporting the bill, Minister for Transport Leo Varadkar said developments in the past two years have convinced him that new legislation is needed in this area. 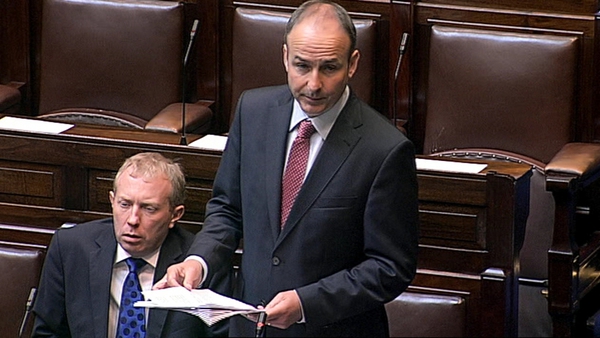