Clare Daly has accused the Government and the media of "slobbering" over the Obama family during their two-day visit to Ireland this week.

US First Lady Michelle Obama and her daughters visited Dublin and Wicklow while her husband attended the G8 summit in Co Fermanagh.

The independent TD told the Dáil that RTÉ had commissioned extra programmes to tell people what the family had for lunch.

However, it failed to mention that they were dining with U2 frontman Bono, whom she described as "Mr Tax Exile himself".

She asked if Barack Obama was going for the "Hypocrite of the Century" award when telling children in Belfast that if they opted for peace they would have the US acting as the wind at their back, while at the same time talking about arming Syrian rebels.

The United Left Alliance TD accused the Taoiseach of pimping out the country to the US.

Ms Daly, who represents Dublin North, said that it was a wonder that he had not decked out the Cabinet in leprechaun hats to complete the "abject humiliation".

Enda Kenny told her that her comments were disgraceful and far be it from her to come and criticise someone who wants to support the Northern Ireland peace process.

He said that in relation to Syria, there was a serious discussion on the issue at the G8 summit.

Mr Kenny said he was not sure if Ms Daly was in favour of the Russian position on the issue.

He said Ireland has taken the position that the EU arms embargo should not have been lifted and that the G8 had decided that talks should take place in Geneva. 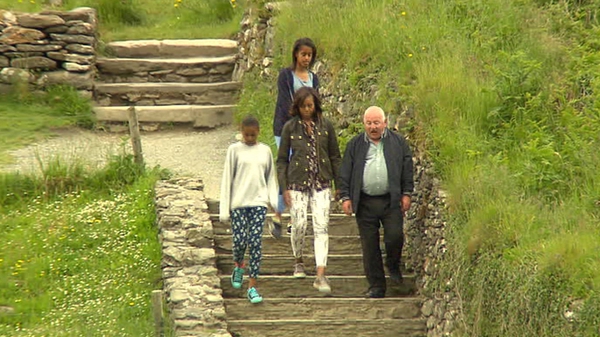 US First Lady wraps up visit to Ireland