The European Commission has clashed with the International Monetary Fund over their handling of the first Greek bailout.

The EC, the IMF and the ECB form the Troika that prepared financial assistance programmes for Greece, Ireland, Portugal, Spain and Cyprus since the eurozone sovereign debt crisis started.

In a report that looked back at the bailout, the IMF for the first time said it lowered its bar for Greece, which could reignite concerns about the lender's impartiality.

The IMF said some aspects of the first aid package to Athens might have been handled better, starting with a restructuring of Greek privately held debt already in 2010.

The European Commission said the first €110 billion rescue for Greece had been put together in extremely difficult circumstances and stressed it had a very different view from the IMF on the feasibility of an early Greek debt restructuring.

"The (IMF) report argues that an upfront debt restructuring in 2010 would have been desirable. We fundamentally disagree," Commission spokesman Simon O'Connor told a news briefing.

Greece restructured privately held Greek bonds only in 2012, imposing losses of more than 70% on investors after the country's recession turned out to be longer and deeper than anticipated and reforms were delayed.

"An upfront debt restructuring would have been better for Greece although this was not acceptable to the euro partners," the IMF report said.

It said the delay only allowed private investors to sell their Greek bonds and shifted the burden to euro zone governments and their taxpayers, who now, being the main creditors of Greece, might have to offer it further debt relief if the country meets agreed fiscal targets.

The IMF said it, too, made mistakes; it lowered its normal standards for debt sustainability to take part in the bailout and made overly optimistic forecasts for the Greek economy.

The euro zone had asked the IMF to take part in its emergency lending programmes to boost their credibility with markets, undermined by the lack of respect for the European Union's own budget rules among EU governments.

After three years of close cooperation with the single currency bloc on five aid packages, the IMF said their operations would benefit from some changes.

"Options for dividing up work on areas that are not macro-critical should ... be explored," the IMF said in the section of its report entitled "Possible lessons".

"There may also be some scope for streamlining procedures and documents to reduce the burden on the authorities," it said.

"If the IMF decides to do a mea culpa, identifies mistakes that have been made, we have to take this into account in the future," he said, but appeared to distance himself from the IMF's view that debt restructuring should have happened earlier.

"Often ... you judge what happened yesterday with today's eyes. It's always very hard to make ex-post judgments," he said.

Last month ECB Executive board member Joerg Asmussen told the European Parliament that the arrangement with the Troika should eventually be replaced by the euro zone bailout fund and the European Commission. But this was for the future, he said.

"I would not advise to change the Troika system now in the middle of the crisis," he said. "We have no alternative to it right now."

Some euro zone policymakers, including authorities in Berlin, are unhappy with the fact that the Troika is composed of officials who are not democratically accountable for the tough reforms they prescribe to governments.

"It is clear that the Troika needs to be rethought," said Sharon Bowles, who heads the European Parliament's economic committee.

"It is not possible that decisions which strike at the very heart of a country continue to be taken without the proper level of accountability," she said.

Asked about the prospects for future cooperation with the IMF within the Troika, the Commission spokesman said the two organisations had been effective despite their differences in extremely complex circumstances.

"We have different traditions, different approaches to many issues. We have always managed to come to sound and constructive solutions and a way forward. I would not jump to any conclusions if there should be any changes to the way we work together on the basis of this report," Simon O'Connor said.

The IMF report has also said that Greece's economy is likely to shrink for the sixth consecutive year in 2013.

The evaluation said the IMF's assumptions for the Greek economy can "be criticised for being too optimistic".

The IMF last year said government spending cuts in general may hurt growth more than it had previously thought, and that countries should postpone deep spending cuts while their economies remain unsteady.

According to the evaluation, the Washington-based lender may have been overly constrained by working with its European partners within a monetary union.

The evaluation also claimed it was not focused enough on ensuring political support existed within Greece for the rapid economic adjustments called for under the bailout.

The report also said there was a problem getting adequate data from Athens on its economy, and the IMF should be more sceptical of official data going forward.

In 2012, the IMF and the other lenders approved a new, longer programme for Greece to help it bring its economy back into gear, once it was clear the previous bailout was not working.

Greece's problems with providing official data may not be a thing of the past, as the fund said Greece provided inaccurate information to the IMF in January.

Greece, which has had persistent problems in collecting taxes, promised to move 50 auditors to the tax unit responsible for those with high incomes to comply with the IMF's conditions.

Greece told the IMF it had done so in order to receive its next chunk of aid, but in fact only 33 auditors were moved.

The IMF's board decided to give Greece a waiver for the action. Greece has since corrected the problem, the board said.

The country may still need some debt relief from its European partners to ensure it can meet the IMF's targets for debt-to-GDP levels, the IMF said in a separate report.

Greece will have a €4bn financing gap starting from the second half of 2014, the IMF said.

It will need to find savings by collecting more taxes and through other measures, equal to a total of 3.5% of GDP.

A senior Greek government official said, speaking on condition of anonymity: "It is positive that the report [about the 2010 programme] recognises that there were mistakes in Greece's programme in the past and we hope that they will not be repeated in the future and then create the need for corrective action." 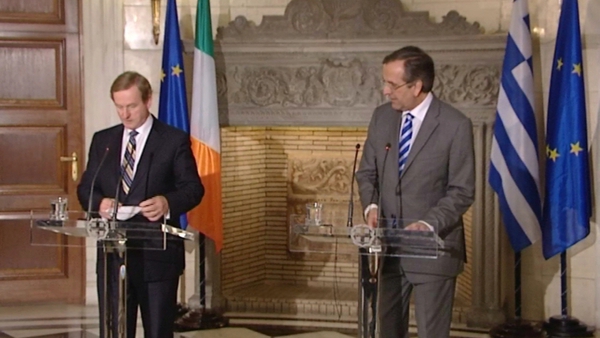