Taoiseach Enda Kenny has said establishing trust with the Troika was a key lesson Ireland learned when it entered its bailout programme.

He was speaking during a joint news conference with Greek Prime Minister Antonis Samaras after 90 minutes of talks in Athens.

The Taoiseach said he impressed upon Mr Samaras the importance of creating a business climate in Greece.

But he said 1,000 jobs per month were now being created in the private sector.

When asked if he had given any advice to Mr Samaras on managing a bailout programme, he said he had told his counterpart that when the Coalition came to power there had been a high level of mistrust between the outgoing Fianna Fáil government and the Troika.

Mr Samaras said that Greece had turned the page and was in a new chapter, although he acknowledged that unemployment was still too high.

Greece will take over the rotating EU presidency at the beginning of next year.

Mr Kenny will also meet representatives of the Greek business community during his short official visit.

It is understood Mr Samaras had been keen on a visit by the Taoiseach for some time.

Diplomats suggest the centre right leader is anxious to convey to the Greek electorate, using Ireland as an example, the idea that a country can emerge from a bailout and return to financial sovereignty.

Greece is in the seventh year of a recession and the economy is still contracting.

The country's debt pile is still over €300bn.

There are some signs of hope, as two ratings agencies have upgraded Greece and the country's bond yields have lowered.

The country is just about on track to reach its fiscal targets this year, but it may need a further loan to reach its targets in 2015.

The coalition government, which was assembled following a close election a year ago, has just about survived and appears stable, but Greece is still in a very fragile state. 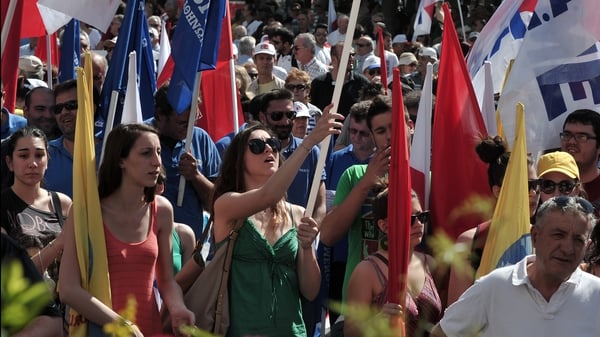 May Day strike against austerity in Greece