The NBRU, the largest union at Bus Éireann has said an all-out strike will go ahead from Sunday, as Bus Éireann presses ahead with a range of cost-cutting measures, despite appeals from ministers to call the strike off.

The Labour Court had recommended €5m reductions in overtime and premium pay at the company.

Minister for Communications Pat Rabbitte has appealed to the National Rail and Bus Union at Bus Éireann to call off a planned strike at the company.

Mr Rabbitte called on union members to re-consider their decision to reject the court's recommendations.

Speaking in Belfast, the minister said the company's financial situation could not be ignored and that a large scale industrial dispute was in nobody's interests.

Bus Éireann has said it is no longer sustainable to continue operations without major cost reductions, saying the company lost €6m last year.

A spokesman for Minister for Transport Leo Varadkar said Bus Éireann is willing to discuss the situation with unions, if they "make concrete and viable proposals to deliver vital savings".

Speaking on RTÉ's Drivetime NBRU general secretary Michael Faherty said that the union was willing to talk to management, but its members could not afford to take the cuts.

Elsewhere, the Coach Tourism and Transport Council has said it will be difficult for private coach companies to carry the overflow of Bus Éireann passengers who will be affected by the threatened strike.

Its chief executive James McGinley said that with the height of the tourism season approaching, there is not much capacity for private companies to provide additional services.

However, Mr McGinley said the private companies will do their best to provide contingency services if the strike proceeds.

"We have already started making plans for Sunday," he said.

"We have already started to organise other coach companies to help us out if we come under pressure. Certainly anyone who arrives at our bus stops, we will be doing our best to take along with us." 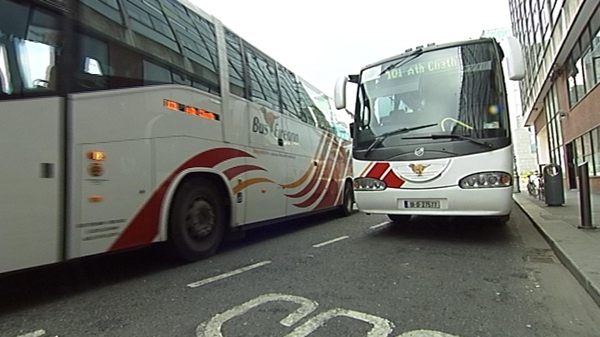 Bus Éireann to be hit by strike from Sunday