The largest union at Bus Éireann, the National Bus and Rail Union, has said an all-out strike will go ahead from Sunday.

Out of 820 votes, 83% of members voted to reject the Labour Court’s cost-cutting recommendations.

The Labour Court had recommended €5m reductions in overtime and premium pay at the company.

Bus Éireann has said it will press ahead with a range of cost-cutting measures.

Company spokesman Andrew McLindon said there are no negotiations planned with the unions following the ballot.

He said he has asked for clarification on the nature of the industrial action and what that means for customers.

Mr McLindon said management was open to meeting unions, as long as they had "viable and credible" alternatives to achieve the savings.

NBRU Secretary General Michael Faherty has said that members could not afford to take the loss in take home pay arising from the planned cuts.

Mr Faherty said Bus Éireann was planning on altering what he described as his members' legal terms and conditions.

But Mr McLindon said it was no longer sustainable to continue operations without major cost reductions, saying the company lost €6m last year.

He said the company had "exhausted" all of the State's industrial relations mechanisms in an attempt to find an agreement with unions.

This included two sessions in the Labour Relations Commission and two days of hearings at the Labour Court.

Mr McLindon said there was a consensus by everyone involved in the process that the company's finances needed to be turned around.

He said that if Bus Éireann had managed to secure the €20m cuts it sought at the start of the process it would have since returned to profit.

Mr McLindon said that under an internal agreement unions were obliged to provide the company with 30 days of formal notice of industrial action.

He said there was a legal requirement for unions to give the company seven days' notice of such action, as a minimum requirement.

Mr McLindon said if there was going to be industrial action this weekend the company would regard that as unofficial.

Earlier, Tánaiste Eamon Gilmore said the viability of Bus Éireann could only be secured if savings were agreed.

Mr Gilmore assured the Dáil during Leaders' Questions that the Government is committed to public service.

He said the hope is that industrial action would be avoided as a result of discussions taking place between now and Sunday.

Responding to Fianna Fáil TD Timmy Dooley, who questioned Labour's stance on the privatisation of the company, Mr Gilmore said: "If the company doesn't exist there will be no jobs in it." 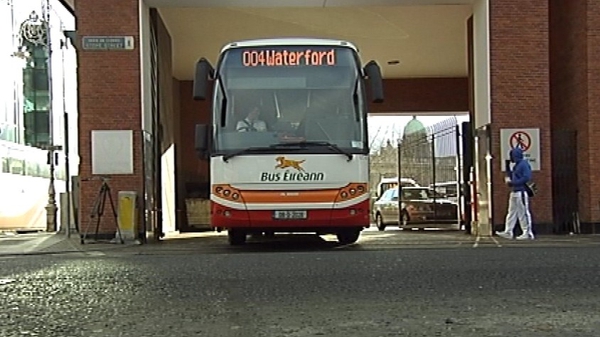