Rescuers and relief teams have finally reached some of the more remote villages in China's southwestern Sichuan province after an earthquake left at least 186 people dead.

More than 11,000 people were injured in the quake, which was measured at 7.0 by the Chinese government and 6.6 by the US Geological Survey.

China's Ministry of Civil Affairs said more than 1.5m people in Sichuan have been affected by the strong earthquake.

It triggered landslides that cut off roads and disrupted phone and power connections in mountainous Lushan county.

Villages further up the valleys were hardest hit, where farmers grow rice, vegetables and corn on terraced plots.

Rescuers hiked into Baoxing county after its roads were cut off and reached it overnight.

In Longmen village, authorities said nearly all the buildings had been destroyed in a frightening minute-long shaking by the quake.

Along the main roads, ambulances, fire engines and military trucks piled high with supplies waited in long lines, some turning back to try other routes when roads were impassable.

Rescuers were forced to dynamite boulders that had fallen across roads, with heavy rain overnight slowing rescue work. 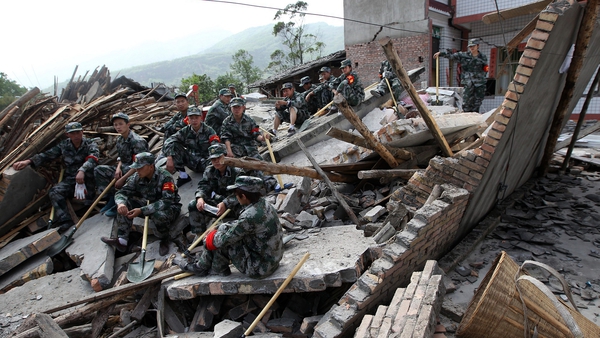 157 killed in earthquake in Sichuan province in China