The European Union has given Cyprus until Monday to raise at least €5.8bn needed to secure an international bailout or face a collapse of its financial system that could push it out of the euro currency zone.

The Cypriot government sought powers today to impose capital controls to stem a flood of funds leaving the island if there is no deal before banks reopen following this week's shutdown.

The European Central Bank warned earlier today it would cut off liquidity to Cypriot banks and a senior EU official made clear the bloc was ready to see the bankrupt island banished from the euro in the belief it could then contain damage to the wider European economy.

The ECB ultimatum came as the island's leaders struggled to craft a "Plan B" to raise the €5.8-bn contribution demanded by the EU in return for a €10-bn bailout from the EU and IMF, while Cypriot lawmakers threw out a tax on deposits, calling the EU-backed proposal "bank robbery".

As parliament convened late in the day, the government submitted a bill seeking the power to impose capital controls on banks, a type of measure unseen since before the country joined the single currency bloc five years ago.

It also proposed a "solidarity fund" that would bundle state assets, including future gas revenues, as the basis for an emergency bond issue, likened in a note by JP Morgan to "a national fire sale".

The speaker of parliament, Yiannakis Omirou, insisted a revised levy on uninsured bank deposits was not on the table.

The European Central Bank, which has kept Cyprus's banks operating with a liquidity lifeline, said the government had until Monday to get a deal in place, or funds would be cut off.

"Thereafter, Emergency Liquidity Assistance (ELA) could only be considered if an EU/IMF programme is in place that would ensure the solvency of the concerned banks," the ECB said.

In Brussels, a senior European Union official said an ECB withdrawal would mean Cyprus's biggest banks being wound up, wiping out the large deposits it has sought to protect, and probably forcing the country to abandon the euro.

"If the financial sector collapses, then they simply have to face a very significant devaluation, and faced with that situation, they would have no other way but to start having their own currency," the EU official said.

Bank branches have been closed all week and are not due to reopen until Tuesday, though ATMs have continued to issue cash.

Several hundred protesters, many of them bank employees, rallied outside parliament after rumours the second-largest lender, Cyprus Popular Bank, was to be wound up.

Demonstrators chanted "Hands off the bank!" and several jostled with riot police, briefly breaking through a cordon.

Cyprus has so far avoided the kind of unrest seen in neighbouring Greece.

In Moscow, Cypriot Finance Minister Michael Sarris said he was discussing possible Russian investments in banks and energy resources to reduce its debt burden, as well as an extension of an existing €2.5-bn Russian loan.

"The banks are the ultimate objective in any support we get, so it'll either be a direct support to the banks or the support that we get through other sectors will be channelled to the banks," Mr Sarris told Reuters during a second day of talks with his Russian counterpart, Anton Siluanov.

He said Cyprus had no plans to borrow more money from Russia and add to its debt mountain.

The Russian Finance Ministry had said on Monday that Nicosia sought an extra €5-bn loan. 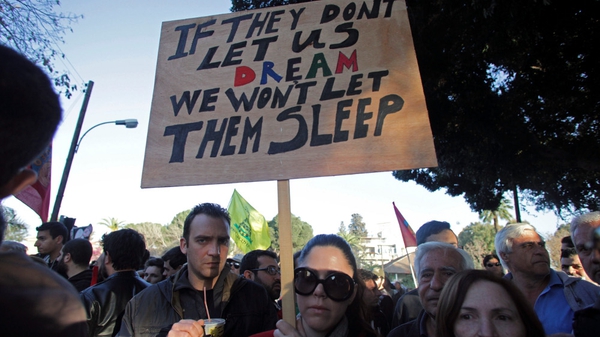 Cyprus draws up 'Plan B' for bailout - officials