The Cypriot government has drawn up a new plan to raise funds needed for the country to secure a crucial international bailout, three top government officials said tonight.

The new bill could be voted on as early as tomorrow evening, one of the officials said.

Parliament had resoundingly rejected the previous plan, which involved seizing up to 10% of people's bank deposits.

It raised the possibility that the country's banks could collapse, the government would be unable to pay its bills and Cyprus could be forced out of the euro.

The officials said the new "Plan B" includes some Russian assistance and a smaller bank deposit tax.

The officials all spoke on condition of anonymity because the plan was not yet being made public.

One official said Plan B was ready to be presented to party leaders at a meeting tomorrow morning.

The plan includes "some form" of Russian help, the official said, but expectations should not be high as Moscow had made it clear it did not want to damage relations with the European Union.

Cyprus has turned to long-time ally Russia for help, with Finance Minister Michalis Sarris flying to Moscow yesterday for meetings and saying he would remain there as long as was required.

Nearly a third of the total amount of deposits in Cypriot banks is believed to be held by Russians.

The idea that authorities could dip directly into people's bank accounts had outraged Cypriots and Russians alike.

The European Union, and Germany in particular, have long argued that they should not have to ask their own taxpayers to contribute to bailing out a country when it was Russian oligarchs who would benefit.

A second government official said Plan B still includes some tax on deposits, but at a percentage definitely lower than those originally proposed.

The official said the EU had given Cyprus until Monday to come up with an alternative, so speed was of the essence.

Not a single Cypriot lawmaker voted for the EU bailout, which included a proposed levy that would have taken nearly 10% from accounts over €100,000.

Smaller accounts would also have been hit, although the government proposed softening the blow to spare savers with less than €20,000.

It was the first time a national legislature had rejected the conditions for EU assistance, after three years in which lawmakers in Greece, Ireland, Portugal, Spain and Italy all accepted biting austerity measures to secure aid.

Outraged Cypriots had emptied cash machines at the weekend after news broke that they would be taxed on their savings to raise €5.8bn in exchange for the bailout.

The ECB has threatened to end emergency lending assistance for teetering Cypriot banks, crippled by their exposure to the financial crisis in neighbouring Greece.

But she insisted there must be a plan to repair the country's bloated banking sector.

Meanwhile, Minister for Agriculture Simon Coveney said during questions in the Dáil that he was as "clear as crystal" that the Government would not target Irish bank deposits.

He said the violation of the principle that assured deposits are safe should never have happened.

He called on Minister for Finance Michael Noonan to convene an emergency meeting of the Eurogroup to deal with the situation. 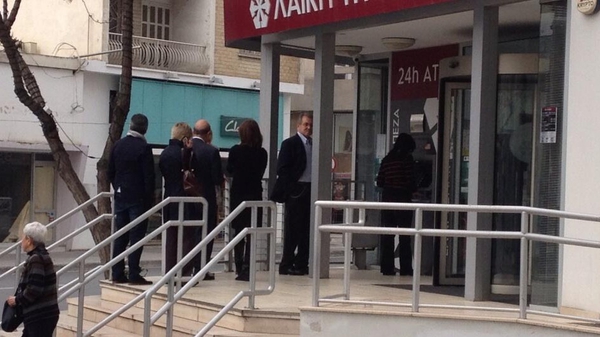