EU leaders have concluded their two-day summit in Brussels, where discussions centred on Syria and the question of arming certain opposition groups who are fighting President Bashar al-Assad.

European Council President Herman Van Rompuy said there was a growing frustration among EU leaders that the bloody conflict in Syria is continuing.

He said that they had tasked their foreign ministers to discuss the question of the arms embargo and find a common position.

French President Francois Hollande had suggested overnight that France may go it alone if a common position was not forthcoming, and the arms embargo eased.

He had earlier justified his call to increase help to the Syrian opposition, saying that weapons were being delivered to Mr Assad's government, particularly by Russia.

"We want the Europeans to lift the arms embargo - not to go towards a total war, we think a political transition must be the solution for Syria. We must accept our responsibilities," he said as he arrived for the summit.

"We cannot allow a people to be massacred as it is being today," said Mr Hollande, adding that Britain saw eye-to-eye with France on the issue.

British Prime Minister David Cameron said leaders had to accept that the existing strategy to achieve transition in Syria simply had not worked.

He said he had a common position with Mr Hollande that this process needed to be speeded-up.

Mr Cameron added that Britain was also prepared to act unilaterally if he deemed it was in Britain's national interest to do so.

Speaking afterwards, Taoiseach Enda Kenny has said no conclusions on whether to arm Syrian rebels had been made at the summit.

He said: "There were quite a deal of observations for and against the embargo. The opposition has been recognised by Europe, but clearly the sources of arms are many and varied."

"Until all of the detail and frankness is brought to the foreign ministers' meetings, people should not jump to any conclusions."

Thousands of demonstrators had protested outside the summit calling for austerity to end and unemployment across the EU to be tackled with more government spending. 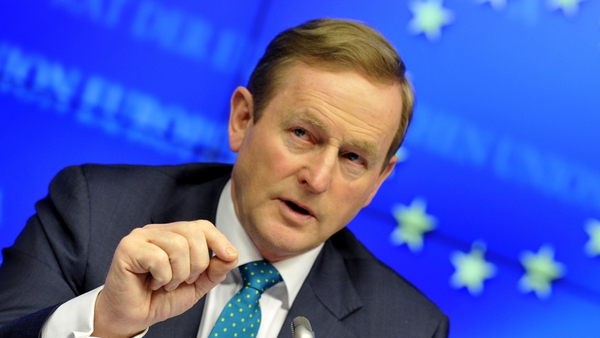