Cardinals have held final discussions before they seclude themselves from the world to elect a new pontiff, with no frontrunner in view.

Stunned by the abdication last month of Pope Benedict, the cardinals have met repeatedly this past week.

They have been sketching out the qualities of the person needed to face the huge challenge of leading the scandal-plagued church.

"The expectations of the new pope and his profile was a recurring theme in this morning's interventions by the cardinals," said Father Tom Rosica, Vatican spokesman for the English-speaking media.

However, a host of other candidates from around the world have also been mentioned, leaving the secretive contest wide open.

"Last time around there was a man of stature, three or four times that of any other cardinal," French Cardinal Philippe Barbarin told reporters, in a reference to Joseph Ratzinger who was elected pope within 24 hours in 2005.

"That is not the case this time around. Therefore, the choice has to be made among one, two, three, four ... a dozen candidates. We still don't really know anything. We will have to wait for the results of the first ballot."

The 115 cardinal-electors from 48 countries will file into the Michelangelo-frescoed Sistine Chapel at 4.30pm tomorrow and will hold an initial vote shortly afterwards.

No one in the modern era has won the necessary two-thirds majority on the first ballot, and the cardinal-electors will hold up to four ballots a day thereafter - two in the morning and two in the afternoon - until they elect a new pontiff.

The average length of the last nine conclaves was roughly three days and none went on for more than five days.

"There is a dynamic that takes over once they're in the Sistine Chapel. The first vote kind of lays out the names. We will have a pope by the end of the week," said Father Rosica.

In preparation for the election, workers hung up crimson curtains on the central balcony of St Peter's Basilica, ready for the moment when the new pope makes his first appearance before crowds gathered in the vast cobbled piazza below.

The 266th pope will face an array of problems - from sexual abuse scandals to the dysfunctional central bureaucracy, known as the Curia.

Vatican insiders say Cardinal Scola might be best placed to understand the Byzantine politics of the church's much-criticised, Italian-dominated administration - of which he is not a part - and be able to introduce swift reform.

The Curia faction inside the conclave is said to back Cardinal Scherer, who worked in the Vatican's Congregation for Bishops for seven years.

If he should win the vote, he would be the first non-European to become pontiff in some 1,300 years.

If neither camp can drum up the necessary support, a compromise candidate might come to the fore, with Canada's Marc Ouellet, US cardinals Sean O'Malley and Timothy Dolan and Argentina's Leonardo Sandri often cited.

The conclave itself is held in great secrecy, with cardinals taking a vow never to reveal the details of their ballot.

Vatican staff who might come into contact with the so-called princes of the church, including caterers and cleaners, are due to take a vow not to reveal anything they might hear in the coming days.

The cardinals will stay in a simple Vatican hotel during the conclave, crossing over to the Sistine Chapel for the twice-daily voting sessions.

Smoke signals from above the chapel - black for an indecisive vote, white for a new pope - will tell the outside world how the ballot is proceeding. 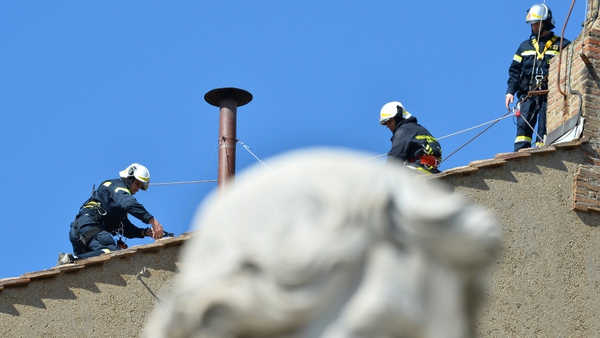