Vatican workers hoisted a chimney onto the roof of the Sistine Chapel in readiness for the conclave of cardinals that will elect a successor to Pope Benedict XVI.

The conclave begins on Tuesday, with the sequestered cardinals using the chimney to tell the outside world whether or not they have chosen a new leader.

Black smoke signifies no decision, while white smoke will announce the new pontiff.

The rust-coloured pipe was attached above the terracotta tiles of the roof of the frescoed chapel.

It is clearly visible from the nearby St Peter's Square, where traditionally thousands gather to see how the secret balloting is progressing.

Although no clear favourites have emerged, the conclave is expected to be wrapped up within just a few days.

No conclave has lasted more than five days in the past century, with many finishing within two or three days.

Pope Benedict was elected within barely 24 hours in 2005 after just four rounds of voting.

Benedict triggered the election last month with his shock decision to abdicate because of his increasingly frail health - the first pontiff to step down in six centuries.

Inside the chapel, workmen were carrying out the final preparations to make the room, one of the most famous in the world, ready for the conclave.

Two stoves were installed and attached to a single flue leading up to the roof.

One, made of cast iron and used in every conclave since 1939, will be used to burn ballots.

The second stove is an electronic one with a key, a red start button and seven tiny temperature indicator lights.

Flares will be electronically ignited inside it to send out either white or black smoke.

Workmen have also been putting the finishing touches to specially built rows of tables where the cardinals will sit facing each under the gaze of Jesus in Michelangelo's massive Last Judgment panel on the wall behind the altar.

Nearly 150 red-hatted cardinals held a sixth day of preliminary meetings, known as "general congregations", to discuss the many challenges besieging their Church and to sketch the ideal profile of the next pope. 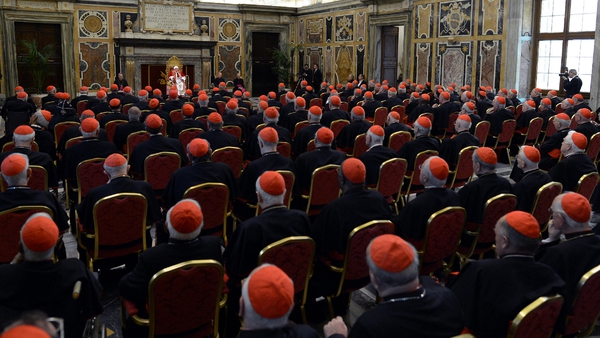 Conclave to elect new pope to start on 12 March