Four unions have walked out of the Croke Park talks saying the Government's agenda is unacceptable.

They described Government demands at talks between public sector management and unions on cutting an extra €1bn from the State payroll as unrealistic and that when they were combined, earnings for public servants would not be maintained.

INMO General Secretary Liam Doran said that if the Govenrment moved to legislate for pay cuts, they would mobilise by all means at their disposal to resist the measures.

He also said that they would be looking very long and hard at TDs going into Leinster House to cut the pay of people earning half of their wages.

Premium payments for working evenings and weekends, outsourcing, and wage cuts for higher paid public servants are among the controversial issues which are being addressed in the talks.

Sources on the Government side said the unions' decision to leave the talks at what they called "this late stage" was regrettable.

However they said it was not surprising given that the unions refused to move their position throughout the process.

They said it was also not surprising because those unions had voted against the previous public service agreement.

They said that as far as the Government side is concerned, the process will continue with the unions who have remained.

The Minister for Jobs, Enterprise and Innovation Richard Bruton said earlier that any public sector cuts will be fair and balanced across all areas.

Speaking on RTÉ's The Week in Politics this afternoon, he said people on higher pay will have to carry more of the burden.

The country's largest public sector union IMPACT, who have confirmed that they will be remaining in the talks for the time being, earlier this evening warned members that unions will not accept what it called "opening management positions" at talks on a successor to the Croke Park Agreement.

In an update to members on its website, IMPACT said it will not accept management calls for a total freeze on all increments or a cut in Sunday premium payments from double time to time and a half.

It cited the Labour Relations Commission - which is brokering the talks - as saying that media speculation about measures for "higher paycuts” were inaccurate.

It said that yesterday, management had confirmed that both the threshold for these measures and the scale of any pay reductions would be political decisions - not negotiated outcomes.

Earlier this afternoon, the head of Ireland’s largest union has warned that it will go to war if a reasonable deal on public sector pay is not reached.

SIPTU President Jack O'Connor said that what he called the "hawks" on the Government side should wake up to the reality that if they push unions into a war, it will not be conducted over the airwaves or in sports arenas.He said that it would involve protracted strikes and all that goes with them.

He warned that while the unions might not win, the Government would not win either.

Mr O’Connor said members were justifiably concerned about the Croke Park process, adding that some were doubtful about whether they should be involved in the talks at all.

He said they were facing a Government with an overwhelming parliamentary majority which was itself confronted with a crisis that continues to threaten the very solvency of the state.

In a criticism of last Monday's rally of members of the 24/7 Frontline Alliance, he said it would take a great deal more than the expenditure of hot air and windy rhetoric in basketball arenas to achieve a successful outcome in this battle.

He said the burden on public servants and recipients of state services could be alleviated through a substantially greater taxation contribution from the rich.

"IMPACT have said from the beginning of the process that we thought this would be the most difficult negotiation we have ever done and it has proved to be the case," he said. 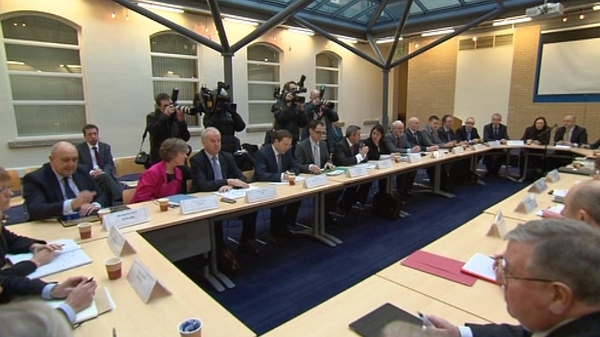