SIPTU has warned members that without a new Croke Park Agreement, their jobs are vulnerable to outsourcing, and their pay is at risk.

In an update, the unions key negotiators Patricia King, Paul Bell and Gene Mealy tell members that it is clear to them that the Government intends to make its €1bn savings by any means necessary.

This, they warn, includes an across the board pay cut and compulsory redundancies.

They also say that they will not accept any increase in the working hours of staff already working 39 hours - and have ruled out the Government's proposed increase of five hours a week for staff working under 39 hours a week.

They say their central objective in these talks is to protect the jobs, pay and working conditions of our members.

The update states that this is why SIPTU's National Executive Council took the view that they needed to do their utmost to shape and influence the way that €1bn adjustment was made.

Negotiators state that they are acutely aware of the potential impact members of the Government's plans.

They add that it is by no means certain that management and unions will be able to reach agreement as there is what they describe as a "gulf" between them.

However, they tell members that negotiators have committed to stay at the table until they have exhausted every opportunity to develop a set of proposals.

Minister for Justice Alan Shatter has strongly criticised the Garda Representative Association and the Association of Garda Sergeants and Inspectors after their members withdrew co-operation from voluntary duties in protest at plans to cut their earnings as part of any new Croke Park Agreement.

Today Gardaí began refusing to use their own cars, phones and laptops for work.

Gardaí say they have suffered severe pay reductions over recent years, and simply cannot afford any cut in either basic pay or premium payments for working irregular hours.

The AGSI is supporting the GRA members and will decide next week how and when to join the protest.

Mr Shatter said the GRA had, through its personal criticism, publicly disrespected the Taoiseach and the Garda Commissioner by encouraging votes of no confidence in him.

He also said the GRA’s executive had by protesting with placards outside pay talks discredited the force in the eyes of the public and were encouraging Gardaí to engage in industrial action.

The GRA mounted a protest outside the pay talks yesterday and has said it is considering similar protests at Leinster House, Government Buildings, Garda Headquarters and Dublin Castle.

It is an offence under the Garda Síochana Act of 2005 for any person to induce a Garda to withhold his or her service or commit a breach of discipline.

Speaking on RTÉ's Today with Pat Kenny, Mr Stone said members wanted to get the message across to the public that gardaí were using their own property to do their jobs.

Mr Kenny said the place to deal with the issues under discussion was at the negotiations, where the concerns of gardaí can be dealt with.

He was speaking after discussions in Government Buildings with Swedish Prime Minister Fredrik Reinfeldt. 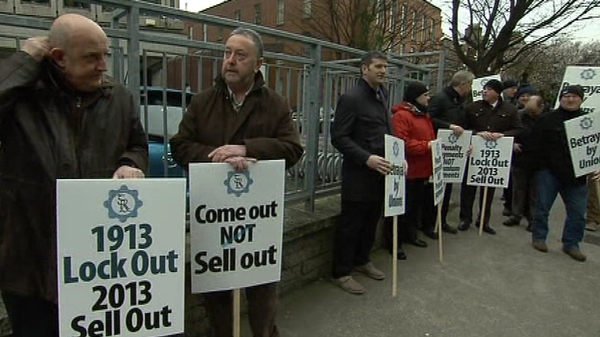