Twenty members of the Garda Representative Association's executive have protested outside the talks on extending the Croke Park Agreement in Dublin.

Up to 20 members of the GRA's executive, including general secretary PJ Stone and president John Parker, held placards outside Landsdowne House.

The Association said the Government is being disingenuous by calling for garda associations to re-enter talks, because they said they were kept in side rooms and not permitted to negotiate.

The Association also said it had only been given briefings.

It said the protest is not a picket or a form of industrial action because gardaí are not blocking the entrance to the talks or preventing people coming in or going out.

Mr Stone said: "There are discussions and negotiations going on here behind us and we're not party to those, nor were we invited to them, so I want to nail the lie that this association has no entitlement to discuss its own pay and conditions of employment."

The GRA is also due to begin its "withdrawal of goodwill" protest on Friday, when gardaí will stop using their personal laptops, mobile phones, and cars and will no longer volunteer to police public events.

The Association of Garda Sergeants and Inspectors has said it will mount a similar protest from next week.

Meanwhile, members of the Garda Representative Association in the Dublin Metropolitan West region passed a vote of no confidence in the Garda Commissioner, Martin Callanan.

At a meeting in Westmanstown in Dublin on Thursday, members also voted to endorse the action proposed by the GRA executive to cease goodwill gestures from tomorrow.

Taoiseach Enda Kenny has once again urged the GRA to re-join the talks.

Speaking on Thursday afternoon, Mr Kenny said the talks are at a very intense and critical stage and he said the place for the GRA is at the talks table.

He said the negotiations provide an opportunity for the Association to discuss in a rational and professional the concerns and anxieties of its members.

Meanwhile, public servants earning over €60,000 a year will be subjected to pay cuts under proposals being discussed at talks on extending the Croke Park Agreement.

Sources close to the talks confirmed the €60,000 threshold is on the table and said that any pay reductions would be progressive, hitting the highest paid public servants hardest.

The percentage pay cuts have not yet been decided.

Some unions said that will be a political decision.

There are multiple strands to the current discussions.

The focus currently is on negotiations about issues that apply across the entire public sector, including pay cuts for the higher paid, additional working hours, and increments.

It is hoped that by tomorrow those key cross-sectoral issues will be progressed significantly.

In addition, talks are continuing at sectoral level to look at what kind of savings and reforms can be secured in health, education, justice, the civil service and State agencies.

Those negotiations are expected to intensify over the weekend once the central issues are clarified.

The 24/7 Frontline Alliance, which represents around 70,000 nurses, gardaí and other emergency personnel, remains opposed to any reductions in premium payments for working nights and weekends, which account for a significant portion of their earnings.

The Frontline Alliance is also mounting an intensive campaign of lobbying politicians against the proposed cuts.

The IMPACT trade union has said that any cuts public sector management wants to make to workers' pay should be equitable and balanced.

Speaking on RTÉ’s Today with Pat Kenny, IMPACT spokesperson Bernard Harbor said management was looking to cut the pay of higher earners in the public service, but the scale of any contribution, the threshold at which it would apply and how it would be deducted had not yet been finalised.

He said that it had been clear from the outset that if both sides could not negotiate a deal, the Government would impose pay cuts, so the unions were trying to reach agreement.

It has emerged that there are proposals to impose progressive wage cuts from a level of between €60,000 and €70,000.

However, it is understood that no final decision on a threshold has yet been reached.

Both union and Government negotiators have insisted that reductions in earnings must be fair and equitable.

Negotiations are continuing at Landsdowne House, and are expected to intensify over the weekend, in the hopes that a deal might be concluded by Monday. 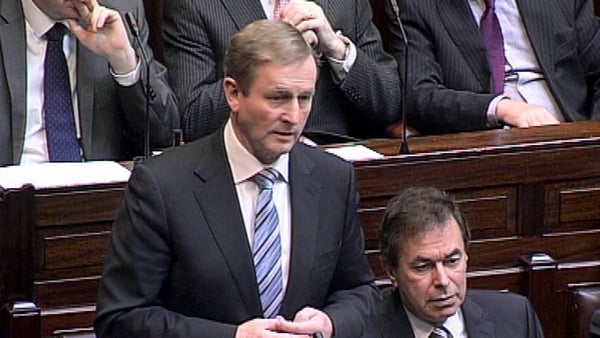