The Vatican has said the conclave to decide the successor to Pope Benedict XVI will start as early as 15 March.

The conclave, when cardinals gather to elect a new pope, will start between 15 and 20 days from when the papal seat is vacated on 28 February, said Vatican spokesman Fr Federico Lombardi.

In his first public comments since he announced his resignation, Pope Benedict XVI said he was fully aware of the gravity of his decision, but confident that it would not hurt the Catholic Church.

"Continue to pray for me, for the church and for the future Pope," he said in unscripted remarks at the start of his weekly general audience.

It is one of his last public appearances before he resigns at the end of the month.

The Pope, who looked and sounded strong, was interrupted several times by thunderous applause from around 8,000 faithful and tourists who packed the vast audience hall.

In brief, prepared remarks that mirrored those he read to stunned cardinals when he announced his decision on Monday, the Pope said God would continue to guide the church because it was much more than its earthly leader.

"I took this decision in full freedom for the good of the church after praying for a long time and examining by conscience before God," he said.

He said he was "well aware of the gravity of such an act, but at the same time aware of not being able to carry out my (papal) ministry with the physical and spiritual force that it requires".

Benedict said he was sustained by the "certainty that the church belongs to Christ, who will never stop guiding it and caring for it".

He said that "he felt almost physically" the affection and kindness he had received since he announced the decision.

This evening, a capacity crowd in St Peter's Basilica gave Pope Benedict a thunderous standing ovation at an emotional last public Mass before his resignation at the end of the month.

"Thank you. Now, let's return to prayer," the 85-year-old pontiff said, bringing an end to several minutes of applause that clearly moved him.

In an unusual gesture, bishops took off their mitres in a sign of respect and a few of them wept.

Unless the Vatican changes the Pope's schedule, it will be his last public mass.

The convent of Mater Ecclesiae (Mother of the Church) is being renovated to offer him a substantial, four-storey, modern home, complete with contemporary chapel, garden and a roof terrace looking out from a rise dominated by the Holy See's TV transmission tower.

With even close aides confessing to surprise at the Pontiff's decision to step down from living as an ex-Pope is uncharted territory.

However, cardinals insist there is no risk of Benedict meddling or undermining the infallible power accorded his successor and no risk of schism.

Once renovation work is complete at Mater Ecclesiae, founded in 1994 as a convent for a succession of female monastic orders by Benedict's predecessor John Paul II, Benedict will be able to move in.

The nuns, who occupied up to 12 cells in the upper floors of the building, have moved out.

Who else will live in the compound to serve the former Pope is unclear. 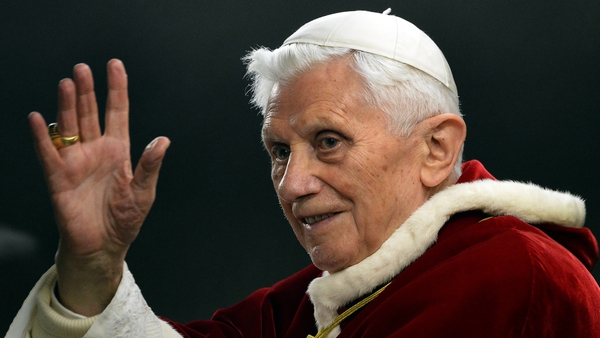 Vatican acknowledges that Pope has pacemaker