A deal has been reached with the European Central Bank in relation to the promissory note used to bail out the former Anglo Irish Bank.

The Taoiseach Enda Kenny has described the deal on the promissory note as a good day for the country and its people.

Speaking on RTÉ's Nine News Mr Kenny said that the deal means the end of IBRC, the promissory note and that the country will not have to repay €3bn a year or to borrow €20bn over the next ten years.

Mr Kenny said that the next step was to continue to get as much of the money used to recapitalise other banks back for the tax payer.

He said that this was following the decision taken on 29 June where the European Stability Mechanism (ESM) was given the possibility of recapitalising banks.

Mr Kenny said that European colleagues were aware of today's deal and welcomed it.

He said the payments were being exchanged for longer-term bonds, with the first maturing in 2038 and the last in 2053.

Speaking at a news conference at Government Buildings, Minister for Finance Michael Noonan said the Government had achieved its objectives in the negotiations with the ECB.

He said what the arrangement meant to ordinary families was that there would be €1bn less taken from them in terms of taxes and spending cuts up to 2015.

A special liquidator is to sell IBRC assets in the coming months, with the National Asset Management Agency directed to acquire what remains along with the sale's proceeds.

NAMA said it had been directed to establish a special purpose vehicle, named National Resolution Ltd, to acquire a floating charge over some IBRC assets.

Mr Kenny told the Dáil there will be a €20bn reduction in the borrowing requirement of the National Treasury Management Agency in the coming years as a result of the changes.

He said the outcome was better than expected and was a historic step in Ireland's recovery.

Earlier, ECB President Mario Draghi said the governing council of the bank had taken note of the Irish operation on the promissory note.

He said the governing council unanimously took note - meaning the deal has been agreed - of the situation and he referred reporters to the Irish Government and Irish Central Bank.

Central Bank Govenor Patrick Honohan said he was satisfied with the promissory note arrangement and was confident that it was not government financing by a Central Bank.

"I'm very satisfied with the arrangement that the Government has made about the IBRC and that it's going ahead," said Mr Honohan, who also sits on the ECB Governing Council.

Asked whether the deal avoids being Central Bank financing the Government, a concern the ECB had on a previous Irish plan, Mr Honohan said that would not be a problem.

"We have that all examined and sorted, it's very far from monetary financing."

Irish benchmark Government bond yields fell to their lowest since before the start of the US sub-prime mortgage crisis after the Government reached the deal on the promissory notes.

This will reduce the country's borrowing costs in the future.

The October 2020 Irish bond yield fell as low as 3.944% this evening, the lowest seen in an equivalent Irish benchmark bond since early 2007, according to Reuters data.

EU Commissioner Olli Rehn said today that the major steps taken by the Government regarding the Anglo Irish Bank promissory notes should further boost confidence in the country as it remains on track to exit from the EU-IMF programme as planned.

Tánaiste Eamon Gilmore said today's outcome is a good day for the country and it had been a long and difficult slog to get to this point.

The long-term bonds will have an average maturity of 34 years and the agreement lifts a considerable burden from the shoulders of the Irish people, he said.

Mr Gilmore paid tribute to the TDs who supported the Government and who, he said, had put the long-term interest of the country ahead of short-term gain.

The Fianna Fáil leader, Michael Martin has said that Fianna Fáil have the right to reserve their position with regards to the deal reached with the ECB, until the Government publish the full details of the agreement.

Mr Martin said they welcome any alleviation of the Irish debt position.

He asked what this is likely to mean for the next Budget, where savings of more than €3bn are required.

Earlier, he said that the ECB did not give Ireland a fair deal from day one.

Sinn Féin's Pearse Doherty said the Government is telling people that they will have to pay back every penny of the toxic Anglo Irish Bank debt.

He said children not born at the time of the bank guarantee will have to pay the debt.

The Government has not only pledged to pay back €28bn in debt but also a further €1bn in interest every year, he said.

He said the bank debt has been turned into a €64bn Sovereign Bond, thus doubling the cost of bailing out the bank.

Independent TD Mattie McGrath said that as a small business man he knows this is not a deal and sadly the Government has not delivered.

No bondholder has been burned, he said, describing it as unbelievable that they are still laughing all the way to the bank.

Speaking on RTÉ's Prime Time Minister Pat Rabbitte has said that the leaked information relating to the Government's plan to liquidate IBRC may have been "accidental, but seemed to be deliberate".

In relation to whether this will mean a less harsh Budget later this year, Minister Rabbitte said the wrong response would be to halt the bringing of the public finances into kilter.

Fianna Fáil's finance spokesperson Michael McGrath said he believes that the Government should have asked the ECB for a debt write-down.

He said that overall it was his view that there were a lot of good things in the deal and it that it did ease some pressure on the budgetary side.

Sinn Féin's Finance spokesperson speaking on RTÉ's Prime Time said that although the ECB does not write down Government debt that the Government should have asked anyway.

He continued: "If you don't ask, you won't get anything." 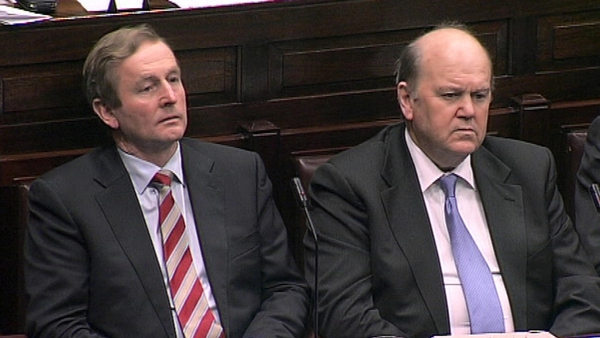