Minister for Finance Michael Noonan said the leaking of a plan to liquidate Irish Bank Resolution Corporation as part of a promissory note deal forced the Government to legislate for its winding up.

Mr Noonan told the Dáil that he took action to secure the assets of the bank and that KPMG representatives are now in control of the bank on his behalf.

Following the passing of the legislation, liquidators will be appointed to wind up operations and "IBRC will cease to exist".

A vote on the legislation was passed in the Dáil in the early hours of the morning by 113 votes to 35.

It was then sent to the Seanad, where it was passed by 38 votes to six.

President Michael D Higgins signed the Irish Bank Resolution Corporation Bill 2013 into law at Áras an Uachtaráin at around 7am.

As part of the winding up, IBRC employment contracts will also go into liquidation, but Mr Noonan said that many of the 800 employees will be re-appointed to "wind-up operations".

The minister said he regretted the abruptness of the way the news was communicated to management and staff, but he said it was "necessary in the public interest", to keep the matter from the public domain until now.

He said the liquidator is poised to carry out his duties and has already taken over and secured IBRC premises in Ireland, London and New York.

Mr Noonan said the Government had made proposals to the ECB on replacing the promissory note and had hoped to announce the IBRC liquidation in conjunction with a deal on the matter.

This was not possible, however, after plans to wind-up the bank were leaked.

He said the note, implemented by the previous Government, continue to be an enormous burden for Irish tax payers.

Mr Kenny told the Dáil that the Bill was approved by Government in a meeting yesterday evening and added that the debt weighs heavily on Ireland as it tries to enter the markets.

The Taoiseach said that restructuring the promissory note will lead to economic recovery and will help both public and market confidence on the path to fiscal consolidation and economic reform.

He said the Bill closes a sad economic chapter and that while Irish people may be poorer after the past number of years, they are wiser.

He said he believed that "the decision to liquidate the IBRC was a step in the right direction".

Earlier, Fianna Fáil’s Finance spokesperson Michael McGrath said his party is prepared to take "in good faith" that not passing this bill exposes IBRC and the State to substantial risk.

He said he had no objection in principle to IBRC being wound up with immediate effect.

Mr McGrath asked Mr Noonan for an assurance that the national interest is fully protected as a result of winding up IBRC.

He said his party's support for the Bill did not mean that Minister Noonan was being given a "carte blanche" in terms of a deal that "may or may not be" announced tomorrow.

Sinn Féin's Finance spokesperson Pearse Doherty said the 850 employees of IBRC were informed that their jobs were gone through Bloomberg.

He criticised Mr Noonan for the lack of information that was made available about the promissory note proposals and the plan to wind up IBRC.

He said the legislation was a precursor to having future generations of children paying for a debt that was not theirs.

Independent TD Shane Ross described the situation as a "humiliation" for the Government and the country.

He said they had "been bounced" into this legislation at a time "not of our choosing but of someone else’s" and that it was "close to a fiasco".

He asked Minister Noonan to explain how the stability of the State was threatened and said TDs could not vote for the Bill if they did not know the other part of the package.

Mr Ross said he had a particular problem with Section 17, which would give wide-ranging powers to the minister to introduce and issue securities.

He said these were powers that he could not accept.

Independent TD Stephen Donnelly said Opposition TDs had not been given enough time to go through the legislation.

He said it was entirely plausible that Section 17 of the Bill could be found to be unconstitutional.

Tánaiste Eamon Gilmore told the Dáil that the Bill will finally bring an end to IBRC, made up of what remains of Anglo Irish and Irish Nationwide - two institutions he said which will live on in ignominy.

He said rumours this week about the future of IBRC were jeopardising the bank and the Minister for Finance took the decision to liquidate the bank.

Mr Gilmore said the Irish people have lost a lot at the hands of the bankers that ran these banks and that since coming to office his Government had worked to renegotiate the deal on bank debt.

He said there is no fairytale solution and "all we can is work our way patiently through the problems".

There were angry exchanges between the Fianna Fáil leader and Labour Minister Pat Rabbitte when Micheál Martin said people "deserve more than melodrama, grandstanding and dishonest presentations" that were seen in the Dáil.

Sinn Féin leader Gerry Adams said the Government found it easier to be tougher on its citizens than on its European partners.

He also called for an investigation into the source of the leaked information and asked for an explanation into implications of IBRC debts if a deal is not finalised later today.

The debate in the Seanad saw Senators express concern for IBRC staff and questions about the wider deal with the ECB on paying the Anglo debt. 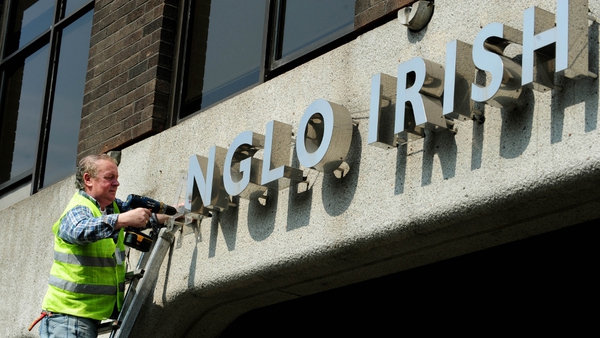 IBRC Legislation: As it Happened