Garda Commissioner Martin Callinan has told the mourners at the State funeral of Detective Garda Adrian Donohoe that his killers will be brought to justice.

Chief celebrant Fr Michael Cusack called on anybody with information about who was responsible for the murder to contact the authorities.

He told the congregation that no one could adequately put into words the pain suffered by Det Garda Donohoe's wife Caroline and children.

The married father-of-two was killed while on escort duty at Bellurgan, Jenkinstown, last Friday night.

The 41-year-old was shot dead by a gang as they robbed the Lordship Credit Union.

The President, Taoiseach and members of the Cabinet attended the funeral mass at St Joseph's Redemptorist Church.

Detective Garda Joe Ryan, who was on duty with Det Donohoe when he was killed, was among pall bearers who carried his Tricolour-draped coffin, with his garda cap and gloves atop, into the church.

Uniformed colleagues formed a guard of honour as the cortege arrived to be met by Garda Commissioner Martin Callinan.

It is estimated that around 2,500 uniformed gardaí, and up to 1,000 plain-clothes officers, attended the mass.

Many businesses in Dundalk closed as the garda's cortege passed through the town on its way to his final resting place in Lordship, close to where he died.

Fr Cusack said Adrian was a loyal, honest, virtuous and faithful man who laid down his life for his community.

"The whole country is gutted by what has happened," he said.

Fr Cusack said the murdered detective was the perfect role model for everybody and the callous mowing down of his innocent life was a reminder that there was good and evil.

"So many people today no longer offer their services freely to the community, but Adrian always did," he said.

He told Det Garda Donohoe's wife there were no words that could bring her husband and the father of her children back, but he hoped the support of her family, friends, as well as colleagues and the GAA, would give her some comfort.

He also said that now is a good time to reflect on the need for further policing.

Fr Michael Cusack told the congregation that being a member of An Garda Síochána was the only profession in the country in which a person is asked to "dance a dance with satan, to come face to face with evil, to play games or have games played on them by people with evil intent".

Colm Donohoe, Det Donohoe's brother, described the 41-year-old as "big in stature" and "big in heart, with so much to live for".

He said Adrian was someone the whole family looked up to.

"He was a very humble man ... my brother Martin remembered him coming home from an under 21s match, when asked how he had played, Adrian said he had done alright. It later transpired that he was man of the match.

"For Martin, in particular, Adrian was a role model, so much so that Martin took 'Adrian' as his confirmation name," he added.

Colm Donohoe paid tribute to his brother's friends, colleagues and members of St Patrick's GAA club, and thanked Caroline, saying she was the love of his brother's life.

"We are devastated by the senseless and tragic loss of Adrian, and all the occasions he will miss as his kids grow up.

"We take some comfort from the fact that he packed so much into his short life, he lived it to his fullest, always with a smile on his face, RIP Adrian."

Mourners told that killers will be found

Garda Commissioner Martin Callinan spoke towards the end of the mass and reassured mourners that the killers will be found.

"No words can adequately express the great sense of loss and revulsion felt by the Donohoe family, the family of An Garda Síochána and indeed the wider public in learning about the cold blooded murder of Detective Garda Adrian Donohoe last Friday night," he said.

"We, Adrian's colleagues, are committed to ensuring that we bring the perpetrators responsible for this callous crime to justice.

"Our resolve is strengthened by the overwhelming support from the President of Ireland, the Government and members of the public."

The Commissioner praised the public for the outpouring of solidarity across the country with messages of sympathy and support being sent to police in stations in every county and online.

He said: "To the local community in the Dundalk and Cooley peninsula, we are forever in your debt for the outstanding generosity you have shown to the Donohoe family and An Garda Síochána at this most difficult time.

Before the mass, Fr Cusack said that Det Garda Donohoe's wife Caroline made all the arrangements.

Fr Cusack said: "Her grief cannot be overridden by pomp and ceremony. We have deferred to her on all decisions.

"She has prepared the mass herself. I was with her until 11.30pm last night.

"We just prepared our building here for accommodating those who have to be accommodated.

"But beyond that it is about Caroline, her children, Adrian's parents, both of the families and all the garda colleagues."

Garda Donohoe was the first garda shot dead by criminals for 17 years since Garda Jerry McCabe was killed by an IRA gang in a post office raid.

Meanwhile, the Irish League of Credit Unions has offered a reward of €50,000 for information leading to the capture of Det Garda Donohoe's killers. 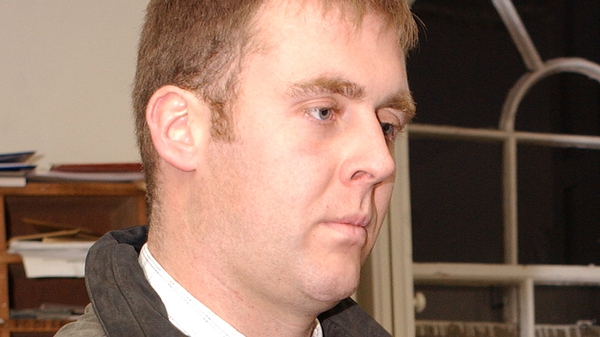