More than 100 police officers have been injured by petrol bombs and other missiles since a 3 December vote by Belfast City Council to restrict the flying of the Union flag over City Hall.

He said the four had reaffirmed "the condemnation of the street violence and our support for the PSNI in the challenging work that they have to do".

Ms Villiers, who visited east Belfast on Monday, reiterated appeals for the road blocks and pickets to end.

She said: "The violence is intolerable and these protests have to come off the streets.

"They have to be replaced by dialogue.

"I am confident that the political parties will find a way forward in Northern Ireland to addressing the kind of concerns that have been addressed in recent weeks."

She played down the fact that Mr Robinson and Mr McGuinness had not yet appeared together in public to speak about the flag issue.

Mr Robinson said: "Both the Deputy First Minister and I do not have a joint position on it.

"I am not in the business of hypocritically coming forward and trying to put a face on issues.

"But it is important that we have a political process that deals with the issues that are causing concern.

"Real progress is being made on that. I am reasonably confident we will be able to have a joint way forward."

Meanwhile, Loyalist leaders in east Belfast have called for an end to "pointless" violence.

"This plea is about stopping the pointless violence, fear and wanton destruction being caused by a few," they said.

Leaflets are now being distributed, calling for an end to the trouble.

A total of 41 organisations and churches backed the initiative.

They said they support the right to peaceful and legal protests.

"The people of east Belfast plead that those involved in the current rioting stop now. We would add that those who come into the area to riot and cause disturbance are not welcome," they said.

"The rioting does absolutely nothing to promote any cause but rather is damaging this community and causing further suffering.

"We who live, work or have a vested interest in East Belfast may have our differences of opinion about many matters but we are united in our determination to stop this community from suffering further."

Mr Mason said it was important a message went out from the community that the violence had to end.

"Everybody is coming together collectively and saying this must stop. We hope it is a turning point," he said.

Mr Gibson said ties had been developed between the two communities during past periods of strife.

"We have been here before. I believe there were relations built over the years which hopefully will see us through over the coming months and years," he added. 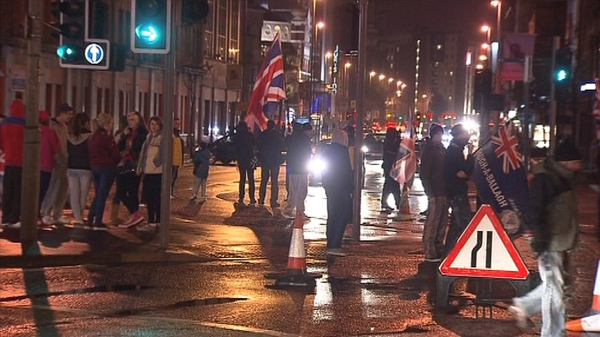