Four police officers were injured in another night of loyalist rioting linked to the Union flag row in Northern Ireland.

One of the officers required hospital treatment as some protests again turned ugly.

The most serious disorder was witnessed in Carrickfergus and the Rathcoole area of Newtownabbey, both on the northern outskirts of Belfast.

Police were attacked with 33 petrol bombs, as well as masonry and other missiles.

Vehicles were set on fire.

Two arrests were made.

Traffic was disrupted on main routes in Belfast and in several parts of Northern Ireland.

It is 39 days since the controversial decision by Belfast's City councillors to change their policy about flying the union flag.

Those organising the protests used social media to make their plans. By staging events in many centres beyond Belfast as well as around the city, this stretched police resources.

Rugby fans travelling to Ravenhill in east Belfast for Ulster's crunch Heineken Cup game against Glasgow faced major disruption due to the pickets.

Another online campaign urged people to defy the protests and stage an "Operation sit-in" in cafes, pubs and restaurants to give businesses hit by the six-week campaign of street action a much-needed boost to trade.

Most local bus services have been temporarily suspended.

In Carrickfergus, police fired one baton round as serious disorder broke out following a protest.

A large crowd of rioters hurled bricks, bottles and fireworks at officers in the West Street area of the Co Antrim town.

Earlier, Belfast's Chamber of Commerce called for an end to the demonstrations because of the impact they are having on business.

£15m (€18.1m) is one estimate put on the lost revenue suffered by Belfast city traders since the row over the flying of the Union flag at Belfast City Hall began on 3 December.

Meanwhile, the DUP has taken the first step in what may become a legal challenge to Belfast City Council's decision about the flying of the Union flag.

DUP councillor John Hussey has submitted a formal complaint to Belfast City Council claiming the decision to end the practice of flying the Union flag throughout the year was in breach of equality provisions.

The council's administrative section is now expected to consider if there is a legal basis to justify the complaint.

Around 70 police officers have been injured and more than 100 people arrested in six weeks of trouble since Belfast City Council limited the number of days the Union flag flies over Belfast City Hall. 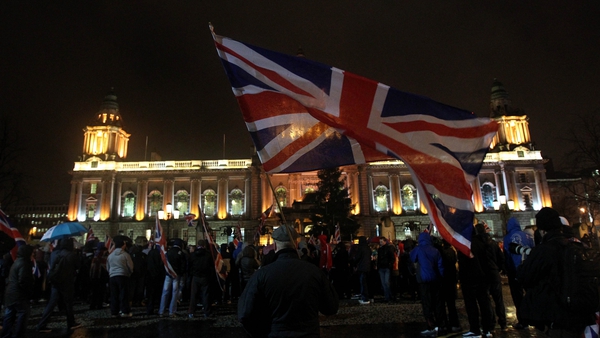