Unionist political leaders in Northern Ireland have indicated a willingness to talk directly with the loyalist paramilitaries involved in orchestrating the violence associated with the Union flag protests.

First Minister and DUP leader Peter Robinson and UUP leader Mike Nesbitt stressed the importance of inclusivity in their attempt to find an alternative to the ongoing street demonstrations.

PSNI Chief Constable Matt Baggott has blamed members of the UVF for directing the rioting linked to the dispute that has erupted in east Belfast.

Mr Nesbitt and Mr Robinson today chaired a special meeting of unionist and loyalist representatives to discuss the flag row and other issues of concern within that section of the community.

The Unionist Forum at Stormont was convened in response to the controversy sparked by Belfast City Council's decision to limit the number of days the flag flies over City Hall.

Mr Robinson said the meeting witnessed "the most representative group within the unionist community to meet probably in half a century".

Loyalists have held protests across Northern Ireland in the six weeks since the vote by Belfast council, with a number ending in violence.

East Belfast has seen the worst of the disorder, with six successive nights of rioting this month.

The forum was attended by members of the loyal orders, community leaders and some paramilitary representatives.

During the inaugural meeting, attendees agreed to set up a task force to engage with the wider unionist/loyalist community.

Asked if the task force would engage with loyalist paramilitaries involved in the riots, Mr Robinson said: "We will talk to anyone who wants to talk to us about how we can move forward in an exclusively peaceful and democratic manner.

"That's the way forward for Northern Ireland and that's the basis upon which we would be talking."

The First Minister said if politicians were to convince others that the constitutional route was the only one to take, they had to talk to them.

He said: "I don't think logically I could do anything other than if I am a constitutional politician, to convince people that that is the way forward, that they should give up violence, that they should not be involved in violence, that this is the way to do it - that's the job of constitutional politicians. There is a better way, this is a better way.

"Never before have people within the unionist community had the opportunity of all of their representatives, no matter what their viewpoint might be, to be in the one room looking at a common agenda and moving forward in that direction - this is quite unique, this is something that no one has seen for decades in Northern Ireland and I think it gives us immense opportunities to take the unionist community forward in a cohesive group."

Further protests have been organised for the coming days.

Mr Nesbitt said it would be asking too much for the forum to deliver an immediate end to the street action.

He said: "Obviously there are plans afoot over the next few days and I think it would be unreasonable to expect the forum, meeting for the first time on a Thursday morning, to have an immediate and universal impact.

"But the general sense of direction is to say to everyone there is a better, positive alternative that would take us all beyond street protest to something that delivers on the political agenda that people have."

Earlier, Sinn Féin President Gerry Adams said the forum has to recognise that sectarianism must be tackled.

He said that leadership is what is missing in the communities involved in the violence in Belfast. 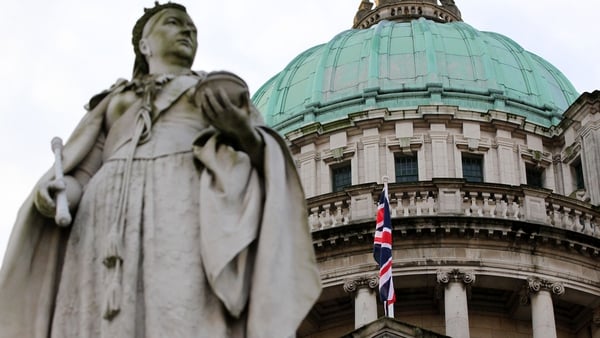