There are increased fears for the 300 jobs at HMV Ireland following the appointment of receivers to the company.

The 16 shops in the Republic will remain closed for the immediate future, while the receivers examine the business and look for a buyer.

A receivership is more serious than the administration process, which is in place in Britain.

Deloitte has been appointed receivers by HMV's lenders.

The receivers said they are assessing the viability of the business and examining costs, including property overheads.

Receivership means customers with vouchers will definitely face a loss.

This is despite the efforts of the National Consumer Agency, which met the company this morning to press the case.

The NCA had questioned the legal basis on which HMV in Ireland refused to honour gift vouchers yesterday.

Staff at two HMV branches in Limerick are staging sit-ins and are seeking assurances from the receiver that wages will be paid.

Meanwhile, €27,000 in funds raised by a charity single for a seriously ill child are in limbo because of the problems facing HMV.

More than 300 musicians took part in the recording of "Tiny Dancer", which went to number one.

Lily Mae Morrison, a four-year-old from Galway, is undergoing treatment for neuroblastoma at Our Lady's Children's Hospital Crumlin.

The money raised by the single was to be divided equally, between paying for Lily Mae's care and the Neuroblastoma Society.

Stephen Macken, who produced the charity single, told RTÉ's Drivetime that the receiver for HMV Ireland, David Carson, had been in touch today.

Mr Macken said: "He said to me on the phone that he was acutely aware of the sensitivity of the situation regarding Tiny Dancer and HMV and he would absolutely look on it as a priority and revert back to me as soon as possible." 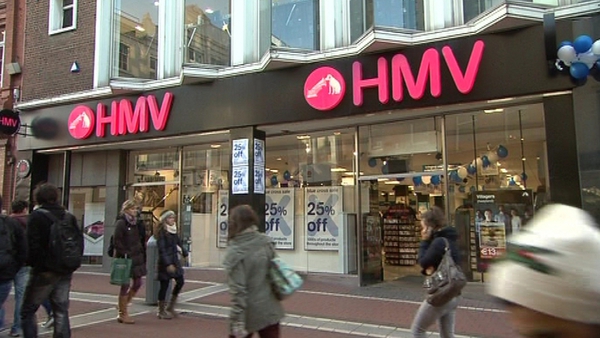 HMV jobs at risk as administrators called in