Music, film and games retailer HMV has gone into administration with the likelihood that the 92-year-old business will close.

The company, which is based in the UK, has had its shares suspended from trading in London.

HMV warned in the run-up to Christmas that its future was uncertain.

The company's administration, the UK equivalent of examinership, also means that vouchers and gift cards, many of which were given as Christmas presents, will not be accepted in stores.

The Consumers' Association's Dermott Jewell said consumers have little comeback with regard to gift vouchers and credit notes.

However, he said under the Sale of Goods and Supply of Services Act, those who purchased vouchers by credit card should make contact with their credit card company.

The association said it plans to contact the Office of the Director of Corporate Enforcement to see what might be done for out-of-pocket consumers.

Poor trading and mounting losses had put the company at risk of breaching agreements with its lenders.

The company has been battling falling sales of CDs and DVDs.

The rise in popularity of digital downloads, both legal and illegal, and cheap CD and DVD offers from competitors, such as supermarket chains, have eaten into both HMV's market share and its margins.

The company sold its book chain Waterstones and closed 60 outlets over the past 12 months, but still reported a dramatic fall in sales and a pre-tax loss of £37m (€44m) over the six months to the end of October.

HMV's shares have lost more than 90% of their value since their peak in 2005.

Yesterday, those shares were suspended from trading on the London Stock Exchange.

Workers at its 238 shops will have to wait to see how administration in the UK will affect them.

HMV Chief Executive Trevor Moore has said he is sure an administration process will result in the survival of the firm in some form.

"I'm confident that we will find a solution," he told reporters.

Mr Moore and Finance Director Ian Kenyon are said to be working with the administrators, Deloitte, to evaluate options for the company. 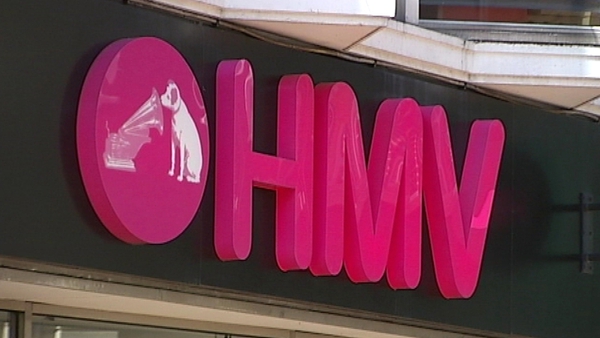 HMV set to call in administrators